Agenda: It is not a dirty word 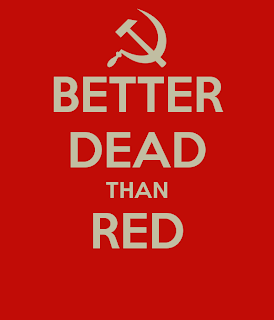 In the classic definition of the word agenda, I freely admit that I have one in the political world.

The word "Communism" is a good word because it still carries negative connotations when pinging even the younger ears in our culture.  But you and I know that the one, true definition of Communism is too specific to be applied to the idiots trying to run the world today.  But the word still has value when applied to Enemies of Liberty because of the aforementioned negative stigma.  Even the word "Collectivist" is too specific to fully define what we of Jeffersonian dogma advocate.

So I lump all of the Bad People into 3 broad categories: Reds, Those who would be Masters, & Parasites.  The three often overlap, but not always.  The three will devour each other, but they constantly seek fresh meat.  America is entitled to be free of all three categories, and we do not need to apologize, we do not need to "...make room for those who are different..." or tolerate for a single moment the infringements upon Rightful Liberty that define such people.  We are under no obligation to suffer such idiots.  And we sure as hell do not need permission to be rid of such people.

I know my audience is smarter than the average bear.  But we need to keep our rhetoric in sound-bite-sized-candies for the little minds that are watching, so going forward I'll be using "Better Dead than Red" quite a bit.  You know I mean more than "Communists".  I'll also be evolving the WWII "Kill-a-Commie-for-Mommy" meme where rhetorically relevant.

Let's face it folks, until the parasites are gone, the animal will remain sick.  Simply walking away from the parasites is an answer that simply Fails under its own weight.  First you do the work, then you can go out and play.

So, tomorrow, when you see the montage of parasitic vermin ruining the republic, refocus your eyes.  Don't see FSA free-loader hitting up the free clinic in Kentucky for an Oxy score.  Don't see eleventy baby-daddies swiping EBT cards.  Don't see slicky-boy politicians with $800 shoes who bought those shoes (and matching belt) with the dollars he helped steal from your paycheck.

Don't see individuals.  Make this problem as simple as it really, truly is: See Reds.

You know this blog doesn't talk just for the sake of talking - so you already know there is a plan to push the Reds into the sea...  We do not have to give up one single inch of America to any Communist/Parasite/Red - ever.

Yeah, I have a flippin' agenda.  Count on it.