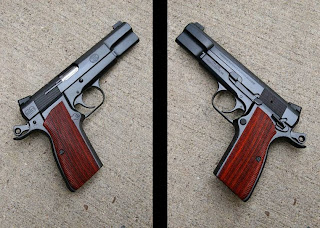 I have a serious question for you gunnies.

I have always been a bit of a firearms snob - and I always made very good money (and I was single), so when I wanted a new firearm, I went and bought it.

I have always thought of buying used firearms like buying a used Ferrari - not a smart move.

As the snob I am I have never owned a used firearm.  For the record, I do not own any now, I do not own any new ones now, and Mrs. Kerodin doesn't own any in our decision to keep my Federal Masters satisfied that I am toothless and fangless without boomsticks.  OK - we'll let them have that one.

But, Mrs. Kerodin has come under personal threats recently, in no small part to our Alabama slug who will have to answer for that.  But that's another issue.  The point is, in Idaho after sitting with the Attorney General and our Sheriff, we intend to find out where the limits are drawn, and Mrs. Kerodin will begin to carry against misogynistic fucks like Razor in the Benewah.

My question to you gunnies: Would you have any hesitation - at all - to guide your wife (or daughter - someone who is precious to you beyond life itself) to purchase a well-maintained used firearm.  All of this assumes that is a firearm that fits her well, a cartridge she can handle accurately in rapid-fire, mechanically sound, and not abused by the previous owner.  Of course it would be check by at least 2 gunsmiths as well as a couple guys I trust in such matters.

Price is not really an issue - a good used Browning is not much different from a new Browning, but as you know some models are better than others, such as one built in Belgium - yadda-yadda...

Are there some handguns that you NEVER buy used?  Are there some that are ok used if checked properly?  I admit, I know very little of the used handgun market.