If you had not committed great sins... 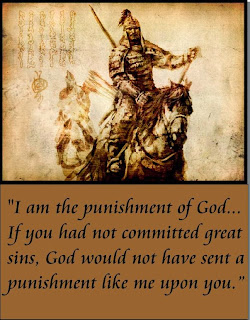 Many a ship has broken her keel upon the Kerodin rocks.

Do you believe that you have a role to play in this lifetime, even if you are not sure what that role may be?  I think there is something to that concept.  I also think I could be drop-dead wrong and life is nothing more than a momentary aberration in the Universe - nothing more than the collision of atoms that flash, and are then gone...

For now, I'll go with purpose.

Since I was a kid I attracted bullies.  I was smaller than most.  I never broke 130 pounds until well after 30 years of age.  I was a lippy little bastard - I know, hard to believe!  But I can tell you in all sincerity that I can be standing alone in the middle of a dark night, minding my own business, and some F*ck finds me and tries to start sh*t.  Holly didn't begin to really understand it until she watched it happen, time and again.

You may consider this pure hubris and bullsh*t - but that quote above from Khan resonates with me.  No, I do not have a God Complex.  It isn't even about religion.

I have found that sometimes when a man, or men, need an attitude adjustment, somehow they find me.  You've seen it here.  Firestone & Folly came to this site and started their silliness.  Militialaw did the same - he came here.  There is a silly-arsed Mayor in Texas who needs to keep my name out of his mouth.  There have been many, and there will be more.  Why?  Beats me, just been a pattern all my life.

You may be tempted to say "Uh, K - it's because you're an ass, dude."  You might not be entirely wrong.

But, I'd buy that possibility if these people did not come to me, out of nowhere.  Don't get me wrong, I know I stir the sh*t from time to time, but progress usually is the result.  People are defined for others to see.  Just leave me the hell alone, and there'd never be a problem.  That is my personal philosophy, and most Patriots want the same in life.

I have work to do in Idaho, made much easier by so many of you.  Thank you.  You know how to reach me if you need anything with which I am able to help.

So, to the ass hats in the community and those who will soon be coming at me from beyond this community - commit no great sins, and perhaps the Gods will keep our paths from intersecting.

You'll be happier, and I'll look like less of an ass all the time.  Don't start none, won't be none...

But I'm not in the mood to be all cosmic and philosophical.  You would be wise to take this post with a grain of salt, and consider the kernel that may be truth.  If you and I are banging heads - ask yourself honestly if it is all my fault, or if you played a role in the Ruckus.

But, the answer is beyond the minds of Men.