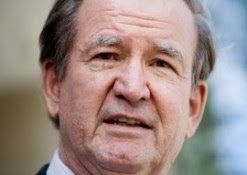 Pat Buchanan examines the ObamaCare collapse through the political lens, and concludes the political fallout could be significant enough to kill Liberalism, or at least make it a dirty word again for another 40 years as the '60s did once before.

As usual, PJBs analysis is spot-on.

My fear: PJB did not discuss the possibility that the current "Liberals" have no intention of moving on during the 2016 election cycle, that they are not operating in what we would call a "normal political paradigm", but instead they mean to take America to a place she has never been before - a true tyranny guided by Stalin, Mao and Valerie Jarrett where there is no peaceful transfer of power.

I agree with PJB: Under "normal" conditions this ObamaCare implosion could cripple the D political machine for generations.

But I am not sanguine we are operating within a normal American paradigm.  I fear we are truly dealing with evil people who intend to bring the system down by deliberate action, then to rule in their chosen "New Normal" - a 'new normal' that will have nothing to do with DoI/BoR Liberty.

I would not recommend you stop prepping.  Not.  For.  A.  Single.  Second.