The Minuteman 15: Review from an owner 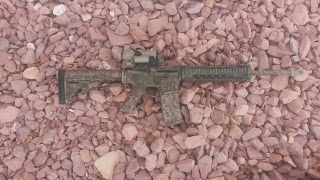 The III Arms Minuteman 15 in the picture was purchased by a III Patriot that Holly and I had the good fortune to meet.  We trained CQB with him and his Tribe, and had a great weekend with he and his wonderful wife.  I'm not going to identify this Patriot for obvious reasons, but I can tell you that he is a serious, smart, dedicated III Patriot.

Click the picture above to get a better look - you'll see the official III Trademark cut into the mag well.  III Arms President Jim Miller built this rifle, as he builds every III Arms firearm, to be a serious fighting weapon for serious III Patriots who know they may have to walk to the Green and honor Captain John Parker.

When our Patriot received his rifle from III Arms, he had the trigger upgraded from stock, added the quad rail (which he had Miller paint for him) and added his optics.  I'm going to post his review of the rifle below.  I can't tell you how proud I am that this rifle has become his Go-To AR.  I am proud simply to have been a tiny part of helping that rifle come into existence through this blog, with the support of all you wonderful Patriots.  Of course Jim Miller is too humble to say it himself, but the man is a craftsman, he is not a parts assembler, he is a firearms builder.  But you don't have to accept simply my word for it.  The fact that this rifle has become the Go-To AR in this Patriots arsenal says it all.

Remember how many provocateurs in this community who sneered and jeered as III Arms rumbled to life, claiming the company was a joke, and worse, and would never ship a single product?  I remember.  Jim remembers.  Our Founders remember.  Supporters of this site remember.  And today it is a III Arms Minuteman 15 that will be taken to the Green if our Patriot ever needs to take that walk.  Congratulations and Thank You to every single Patriot who supported the III Arms concept.  Congratulations and Thank You to Jim Miller for picking up the rope and pulling far more than his share of the weight of this project, and he is still going strong.  To the critics, nothing needs to be said.

And remember, III Arms is not about profit.  There are no salaries.  Jim has taken point on this aspect of building the Citadel, because as you know the profits generated from III Arms are used for the Citadel.  It was just over a year ago (Summer 2012) when we first mentioned the concept of the Citadel, and evolved the idea that III Arms would be the cornerstone economic engine to bring the Citadel to life.  It was just over a year ago, November 6th to be exact, when Jim accepted his first order.  It was February of this year when the BATFE issued Jim his license to build.

I am proud to stand with each and every one of you, my fellow III Patriots who come to this little website on the internet.  We have all proven that we accomplish goals.  We do the work.  Every III Patriot in this audience who helped, even if only with your moral support, has proven the III has teeth.  You made all of this possible.

Here is the review written by the III Patriot who owns the rifle pictured above:


A few additional pictures will be coming your way of my III Arms AR15.


I had the quad rail installed that you painted for me.


I had a better trigger installed as the stock triggers on AR's are not to my liking.


It has a Browe scope and Larue backup iron sights now.


I also put on an ambi charging handle since I am a lefty.


I have tried 6 different mags so far.


A surefire 60 rd, Pmags (yours and a window Pmag), HK steel mags, stock GI mags and a cheap plastic mag.


Fired each mag loaded to capacity until empty and locked open.


All mags functioned in rifle flawlessly and no malfunctions at all.


Extremely pleased with your craftsmanship.


Extremely pleased with fit and function of rifle and its paint job.


Its my #1 AR now.
~~
Huzzah, Patriots!  Well done.  Well done to each and every single one of you who helped to make this happen.  You have proven that you are more than words, you will not bend knee, you will stand tall and help pull the rope.  We will do more work together.  By Patriots, for Patriots.  We will restore Liberty in our lifetime with Patriots like you who dare to stand and be counted.
Here's the III Arms company website.
Lives.  Fortunes.  Sacred Honor.
Kerodin
III