Americans are very good at killing one another... 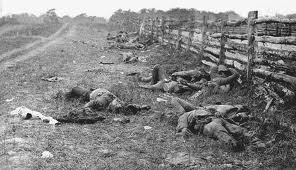 It's a Friday afternoon, many people are on their way home from work, or waiting out the last clicks of the clock before they can leave.  There is a beast on the loose, and so very few are aware, and even fewer think it will come for them.

I have been very fortunate.  Holly and I were able to travel for many months, meeting Patriots and forming what I consider to be an extended Tribe. I have met many online that I have not yet met in person.  My gut tells me they are friends and allies with whom I simply haven't shaken hands, yet.

A bunch of us are headed for Idaho to be part of the Citadel project.  But make no mistake, the Redoubt is much bigger than just Idaho and people are moving into those areas for the same reasons - to be with like-minded souls, to be off the major lines of attack, to be in places easily defended and where crops and livestock can flourish.

Across this land we have small Tribes prepping, planning, networking, doing all they can to be ready when the Beast is loosed.  They refuse to leave their homes, for whatever reason.  Firstly, I think, they might say "This is MY HOME, dammit, MY COUNTRY, dammit - and I am NOT backing up an inch.  Can't find fault with that logic - at least no real American can fault that logic.  They have roots where they are, they have families, many of whom have been in those areas for many generations. The luckiest ones are in the hills and mountains, and in places where the Beast will not go hunting right away.

When I speak of the Citadel I speak of a specific place and a specific group of people.  Tribe.  And when I speak of my Tribe, I speak of far more than merely the people who will be in Idaho.  From Colorado to Texas to Illinois and Florida and Wisconsin and beyond, even to my home of many generations here in the DC Metro area, my Tribe is scattered - which is an advantage, in many ways.

So many of our fellow have no idea the Beast is coming.  They look at that picture above from Antietam and they are so far removed from the reality that is in that picture, they simply can't relate from their place in time and space.  They have never known a world with violence of that scope, so close.  They can't see over their SmartPhone.

I have made a request recently, the biggest request I have made of this community - a specific pile of money that we can use to launch a professional, DC Political Class fundraiser in an effort to fill our coffers.  If we had to fight right now, most of us are sadly aware how soon we would look like the poor Souls in Valley Forge.  We need real money for meds and for training those who can't otherwise get training, for weapons and ammo for those who would otherwise fight with sticks and rocks.

One Patriot answered the call.  He's digging very deep, but he is ready to do this.  Shortly after, another Patriot jumped in with a chunk of money that helps take a little of the weight off our first Patriot.  So, now I am going to ask the rest of you: Hit the PayPal button below and dig as deeply as you can to help your fellow Patriots who are willing to carry so much more than their share of the weight.

We fight the same Beast, folks.  I don't care if you are in Seattle or the Keys of Florida, Maine or Texas - the Beast coming intends to devour you, make slaves of your women and children, and to turn generations of your posterity nothing but workers who feed their extravagance.

We fight Communism, and we fight with Liberty and Freedom.

It is that simple.

There is going to be killing.  We are Americans.  Killing is one of those things in our DNA that we do well - especially when it comes to killing other Americans.

There is more to this fight than bullets and beans.  There are Hearts and Minds.  All of it requires money to make it happen.

Our enemies haqve nearly endless resources compared to us.  The Fundraiser is to get more people who are in our camp, putting their dollars into our treasury so that Militia units can have armor, smaller Tribes can have meds, Larger Tribes can take and hld ground.  So that courriers can get from Tribe to Tribe with vital comms.  So that when we lose aCessna that was doing recon, we can get another one.

This ain't no game, Patriots.  Hit the button below, please.  I know it is Christmas is here.  I know what next Christmas will look like if this Beast is not killed.  Please dig deeply when you hit that button below.