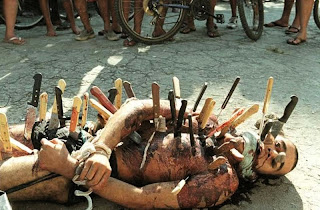 17 year-old young man is cuffed in the back of a LEO cruiser - and shoots himself in the head.  For trespassing.

LEO says they showed restraint.  Of course they followed protocols and checked him for weapons before putting him into the cruiser - I mean, that's just plain good police work, yes?

Do you understand that Rule of Law is dead.  It is a beautiful concept, but few Human Beings are capable of embracing it and living it.

I'm simply going to point out that any man, woman or child in America today can commit suicide, while handcuffed, in a police cruiser, and that will be the end of the story.

You do what you want to do, Patriots.  But I would suggest you all consider every single interaction with LEO as a potential DeathFight.  Every.  Fucking.  Time.

Here's the story at Kenny's place.