If you try to take our guns, we will kill you! - (Inserting snorts of derision here) 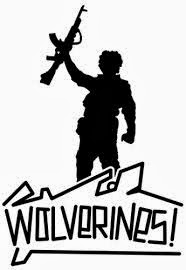 Not one more inch!!

If you try to take our guns, we will kill you! (or we'll just buy your carry permit...)

Patriots: Say what you mean and mean what you say.  Don't be that guy.  Don't be the douche who promises Shock & Awe, then pretends he doesn't see the guys dancing all over his line in the sand because he's a fucking coward.

The moment you draw a line in the sand and fail to enforce it, you lose all credibility.  If you continue to stand with such people, you lose respect.  That sort of behavior stains us all.

Firearms are being confiscated by .gov in armed raids, and we've been reporting on that for months.

Not one gun owner has defended himself in California.  Not one OathKeeper has stepped up.  Not one militia in California has done a thing about this topic.  Not one Patriot has gone to California to intercede.  Hell, I haven't even seen one Open Letter on a blog directed at men who actually have the balls to carry out their threats and confiscate guns.  Seen lotsa Open Letters, though...

On the bright side, a Texas Grand Jury nullified .gov attempts to prosecute a guy who defended himself in a no-knock on his home and killed one of the home invaders - I mean LEO.  Good on ya, Texans.  Let's hope this spreads. (Story here)