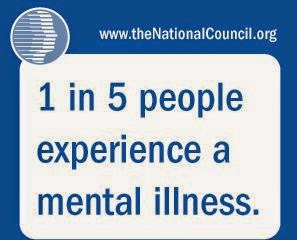 You will remember in the aftermath of Sandy Hook I was not concerned with Federal Gun Control restricting types of weapons.  I knew FedGov had no stomach for another AWB or anything like it.  I warned readers that the true threat would be expanding the pool of "Prohibited Persons" via mental health.  Time and events have demonstrated these predictions were correct.  Of course several States have tightened their 2A, but nothing Federal.

In the time since we've seen considerable ground preparation supporting the mental illness play.  The top of the blog has a graphic from Zoomie on "Oppositional Defiant Disorder".  Yes, this is now a clinical "thing".  the clinical diagnoses of many "disorders" have been broadened to snare the widest possible pool of people.  For instance, if you lose a spouse or parent and you grieve any more then 2 weeks, you are clinically suffering from "mental illness".

The case will be made very soon, in sweeping scope, that mental illness is bad, m'kay.  Guns in the hands of the mentally ill is bad, m'kay.  The list of people who are "suffering from mental illness, thus forfeit their 2A rights" will soon include everyone who has ever been prescribed meds for depression, ADHD, and even sleeping pills.

For the first time I heard a serious Washington insider predict the same.  John McLaughlin predicted on his show that within six months of the November elections, FedGov will impose massive 2A restrictions based on mental illness.

If you have been prescribed a sleeping pill you won't be in the first wave of new Prohibited.  But they'll expand definitions quickly.  I also suspect FedGov will try to mirror what a few states have flirted with doing - any household in which there lives any person who has ever suffered "mental illness" (how many kids have been given Prozac by schools?) will become Prohibited Households until that child or person no longer resides in the home.

Personally, I think RevWarIII will turn perpetually hot soon after the November elections.  But Enemies of Liberty will still pass such laws, even in a state of war...

If here is something at your gun shop that you want in your possession, I suggest you get it very soon.