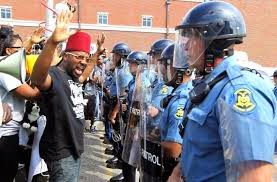 As discussed yesterday, Ferguson is a neighborhood inside the St. Louis highway loop.

The actual number of people going out at night and raising a ruckus is but a small fraction of the residents.  Yet Ferguson PD could not handle it.  St. Louis County could not stop it,  Teams of State Troopers had no effect.  And now the Missouri Guard is on the scene.

And the protestors/looters are not even seriously using 2A yet.  Note in the CNN piece linked below the use of the word "projectiles".  The report is obviously talking about stuff being thrown, and spinning it to sound like bullets.  Yes, shots were fired - but the CNN piece is deliberately misleading.

The lesson is simple and on full display: .Gov hasn't the manpower to handle a real fight.  You can safely extrapolate Ferguson to the other major and modest metro areas across CONUS.  Sure, .Gov could put a temporary end to the Ferguson scrum with just a few well-placed rounds.  But we all know that is a bad PR move and will only increase sympathy for Ferguson residents and angst toward .Gov.

Heck, the Militia units in Missouri might even begin to show up to protect the citizens.

.Gov is losing on many levels in Ferguson.

Kerodin
III Percent Society, here.
Posted by K at 6:13 AM