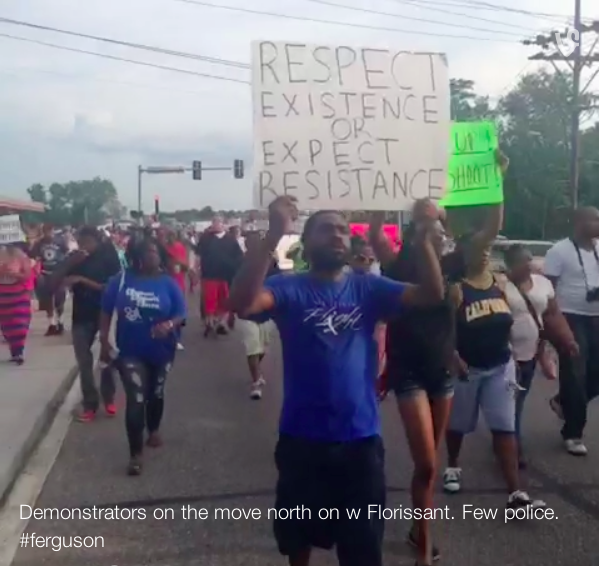 Probably one of the best protest signs I have ever seen.  It's been catching my eye all day, and I was only motivated to write about it when a fellow III Patriot sent me an email.  He wrote me and as I read his words I realized he was in my head.

Is there any III Patriot who looks at that sign and would not IMMEDIATELY start walking the same direction as this man, providing him with Constitutionally-codified, Natural Right Law protections?

When you find a man who expresses Rightful Liberty, even if it is not as eloquent as Mister Jefferson, you stand with him.  When a man shows you who he is believe it.  Such men deserve your protection, your respect, and you owe him the benefit of your AR covering him.

You welcome men and women into your sphere of protection - your Tribe - when they demonstrate worthiness.  What more can you ask of this man?  He's holding a sign against men with a sniper scope on his face.  There is no AR slung across his back.

The number of people in this country who would be willing to accept Rightful Liberty is tiny.

I have already identified two men who are probably tasked with putting a bullet in my head when the time comes.  If you don't think you have one or two such people infiltrated under your wire, you are NOT playing prudently

Do you have gear set aside to give to people like this man when you run across them - the tools to give him the ability to fight for his own Liberty - which makes your fight easier?

People willing to fight for Rightful Liberty are a tiny minority.  This man is the way Hearts & Minds are turned inside his social circles.  That does not take an Army career, or short-term job - to noodle through for most of us.

Time is short.  Every single move we make must advance the goal to inhibit the Will and Means of OpFor to wage war.

The man holding the sign above is one of those actions.

Here's the blog I found it on - and it is added to the blogroll.  I hope you do the same.  Good Job.