There is a difference... 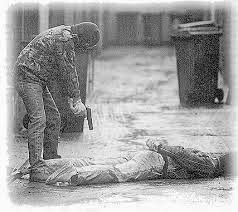 Blue on Blue: Friendly fire is an attack by a military force on friendly forces while attempting to attack the enemy, either misidentifying the target as hostile, or due to errors or inaccuracy.

Kneecapping: Kneecapping is a form of malicious wounding.

There is a difference.  It is an existential difference in the real world.

I would suggest to every Patriot: Hone that radar, fast.  And if that radar is out of whack, your IFF radar is fooked.