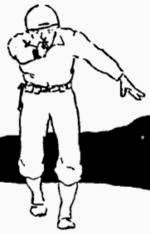 Major Eric Sykes, of Fairbairn-Sykes fame, reportedly ended every Combatives class he taught at Camp X with the title of this post - "...and then, kick him in the testicles..."

He was part of the team put together to train SOE & OSS agents and commandoes.  He had a lot of experience in CQB, and he had many techniques to offer before the finale of a swift boot to the balls.

He was an advocate of point-shooting.  He was good at it.

He was a dangerous man.  He taught other men how to be dangerous.

Here's one of the books he wrote with his ally Fairbairn (it's an Amazon link) that I commend to all of you.  Title: Shooting to Live With the One Hand Gun

To be dangerous is from within.

To be dangerous is a choice.  Then get a few tools and learn to use them - always driven by the conscious choice to be dangerous.