Rightful Liberty by the numbers

The fundamental question: Has the notion of Rightful Liberty expanded or contracted since 1776?

Does the concept of Rightful Liberty have any legs among Mankind?

The numbers say - not so much.

A powerful notion or idea sweeps the planet in a generation or three - and that was pre-internet.  Now with the net powerful notions can literally catch fire in hours and rise to global recognition in less than a day.

Say what you will about the Constitution - RevWarI was not fought for the Constitution, it was fought for the notion of individual Liberty, best expressed by Jefferson's Rightful Liberty quote used so often around here: Rightful liberty is unobstructed action according to our will within limits drawn around us by the equal rights of others.

It has been 238 years since the DoI, and of course people had already been killing one another over the notion of individual Liberty for a while when July 4, 1776 rolled around.  Since then we've had a couple-hundred years without the internet, and a couple decades with the 'net.  Jeffersonian Liberty hasn't caught on - not even here.

Let's compare to a topic with which I am quite knowledgeable: Aiki.

We'll focus just on the Aiki-do variant for the sake of easy numbers, and Aikidoka - please let's not have a debate.  Modern Aikido is a joke in most dojos.  If you do not get to the Aiki-jutsu roots of the art, you've got nothing.  And do NOT write me and try the argument that "Aikido is the actual practice of Rightful Liberty" - don't waste my time or yours. 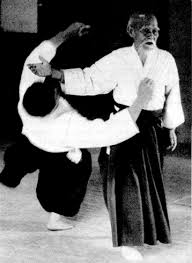 Anyway, the old guy in the picture is Morihei Ueshiba, credited by the world for the "creation" of Aikido.  He died in 1969 (just 2 years after my birth) and the word "Aikido" began to be used in the 1920 - 1930 period as Ueshiba began to refine his formidable martial skillset (primarily based on Daito-ryu Aikijutsu) into the kinder and gentler Aiki that has today, in most schools, been reduced to the combat effectiveness of a dance & massage parlor.

Anyway, compare Rightful Liberty - over which a world war was essentially fought - to Aikido, and tell me which has more reach of active participants.  Aikido practitioners number in the tens-of-millions and is practiced in every country on the planet.  Aikido can't be compared to something like McDonalds (which is also global), because Aikido training requires the participants to get off the sofa, pay money, and physically invest considerable energy in every session.  That is a notion that has "caught-on" in the world.

How many people in America - even one day per week for 60 minutes - get off the sofa, drive to another location, pay money, exert physical energy, to advance Rightful Liberty?

Was the notion of Rightful Liberty Mister Jefferson put forth and the war fought over it simply a birthing contraction, a natural evolution of the Greek and Roman notions, that will now begin to expand once more in violence across the world, or was it merely an aberration that will be snuffed out of existence because so few refuse to embrace it and become a practitioner?

Sadly, I think the odds are better for the survival of hippy-based Aikido dojos than Rightful Liberty.

Kerodin
III Percent Society, here.
Posted by K at 3:00 AM