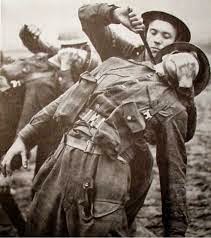 What is your self-image when you consider your role as a Militiaman?

If you are of an age and healthy-enough to go to the Green, I encourage you to adopt the mindset of the Commando.  Not a SEAL or Green Beret or SAS warfighter, but an older definition of what makes a Commando.

In 1652 the Dutch word 'Commando' referred specifically to bands of Militia.  The first 'Commando Law' compelled Commandos to equip themselves with a horse and firearm when defense was needed.  This was known as the 'Commando System' and the men called up were said to be 'on Commando'.  Over the years the word evolved to refer to units, then it came to represent individuals of those units.  Today there is tremendous hype associated with the word Commando.  Indeed, Green Berets and SEALs are not technically called Commandos, but their missions require a higher level of performance than the average soldier.

In WWII William 'Wild Bill' Donovan was given the helm of the OSS, and he worked closely with the British SOE, using SOE as a model for his new organization.  He brought in trainers such as Fairbairn & Sykes & Applegate.  In the months before D-Day it was determined that the Allies should drop specially tasked Soldiers behind enemy lines to help create havoc and confusion in the rear, as conventional forces hit the beaches.

This is where Bill Donovan and his counterpart created the Jedburghs.  Since there were no "Commandos" or "Commando Units" in the US, OSS & SOE recruited combat veterans with a tendency for daring to carry out the mission, to perform warfare that falls into the realm of the Commando.  Jedburgh Teams consisted of three men.  Two were commissioned officers - the CO and XO.  A NCO was assigned to each team as the radio operator.  These teams wore their uniforms and were tasked with missions of the Commando - blowing rail lines and bridges, disrupting supply lines, coordinating resistance, and generally killing Germans.  Much of the UW skillset used by Green Berets and SEALs originated in the Jedburghs.

The men selected for the Jedburgh Teams were pushed through a series of schools to teach them a crash course in Commando skills.  Just average guys who had seen combat, and demonstrated a little 'extra something', then thrust into a special warfare role.  The Jedburghs conducted themselves with great professionalism and scored many successes.  Some of them went on to be known for generations to come.  John Singlaub.  Allen Dulles.  Aaron Banks.  William Casey.

A Commando in RevWarIII, drawn from the ranks of the Militia, is that man or woman who is a III Patriot, who would walk to the Green with John Parker, who takes the personal initiative to learn more than merely the basic skills of the soldier.  The Commando is a natural Leader of Men, by example.  He leads from the front.  A Commando is not a superhero.  A Commando is not the Ironman triathlete who possesses super-human endurance.  A Commando is not necessarily SCUBA and HALO qualified with a pedigree from .mil after years of service and elite training.

The Commando in RevWarIII is that man or woman who teaches himself skills beyond the basics, and who has the courage to undertake tasks by himself or with a small team of allies that will impact the will and/or the capability of the Enemies of Liberty to wage war.

The Commando of RevWarIII is a mindset, supported by special skills, and the courage to go into Harm's Way in enemy-controlled AOs.

Most people reading this post self-identify as Militia.  Whether organized or unorganized, the Militia is an honorable and noble endeavor.  Many of you have the courage and ability to serve your fellow Militiamen as a Commando.  By default you will be seen as a Leader when the Candid Exchange of Ideas becomes a daily occurrence.

I implore all of you to train harder, to teach yourself or find a trainer, with skills beyond simply shooting, moving and communicating.  Accept the challenge to build your skillset so that when you look into the mirror you see a Commando.

I mentioned in a post below that I am launching a school for Patriots in Idaho.  The curriculum is designed to teach you the skills of the Commando.  I have named the school The Jedburgh Academy.  When you come to train, you will meet some of the finest trainers in America.  When you leave you will have the skillset of a Commando.

Go look in the mirror, then look inside your heart and ask a single question: Do I have what it takes to be a Commando in this Militia?

Most of you will answer 'yes'.

The next step is to add skills to your knowledge base.  Max, J.C., DTG, Sparks, and other trainers can teach you more than you currently know.  These men can teach you the basics as well as Graduate-level skills.

When you return home, you will be in a position to teach your Tribe in aspects of unconventional Warfare.

When it is time for you to go to the Green, you will have the skills of the Militia Commando.

Then, you must use those skills as necessary to secure your AO.