A bit more about that guy in that country that moves troops by trains and is nothing to worry about... 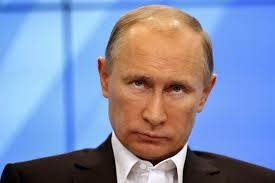 Putin also suggested that the West was demanding too many concessions from Russia, including further nuclear disarmament. Likening Russia to a bear — a longtime symbol of the country — he chided the West for insisting the Russian bear “just eat honey instead of hunting animals.”

"They are trying to chain the bear. And when they manage to chain the bear, they will take out his fangs and claws,” Putin said. “This is how nuclear deterrence is working at the moment.”  Emphasis mine - K

Folks, I'll never go into much detail but here is a little history: When one is a very serious student of the Martial Arts - on the path of the Warrior, not just a guy who goes to the dojo a few times a week - one can meet very interesting people of very interesting professions, and sometimes these people offer you work.  You can add a +1 to that if you were born and raised in Washington DC and have a few family members with interesting careers even for Washington DC.

I was a young adult in the last few years of the Cold War and after.  I swam in some shallow waters that were very interesting, and when I was accepted to study in Los Angeles, the waters got a bit deeper.  When I met Holly, the waters were deep, and I swam once again for a few moments.

All that is to tell you this, from a slightly better than average pedestrian vantage: Vlad Putin is a proud Russian to the marrow of his bones.  He swam in deep Intel waters before the wall fell.  He believes that America has humiliated his countrymen the same way our President believes America has humiliated every non-White man and woman in the history of the republic.

Vlad does not suffer from narcissism.  He is intelligent, patient, and has no trace of cowardice in his blood.  He is smart to the point that he can think around corners.  Vlad understands that his Russian ideology can win in the long game, he doesn't need to rush into war with America and defeat us militarily for his ideology to win.  America is imploding - he need only be patient, then hammer-fist China when the time is right, and the world will learn to speak Russian.  But know this: He's got real balls, real bravery, real courage, real love of his Country, real Pride in Russia, and he truly believes Russia is destined to ascend to be the sole superpower on Earth.

What our President and administration is doing to Russia is, literally, playing with nuclear war.

Our administration barely has the IQ needed to breathe and spit, and are playing with a thermite grenade in a playpen filled with babies - they don't even have the mental capacity to understand what they are doing.

And this train is moving fast.