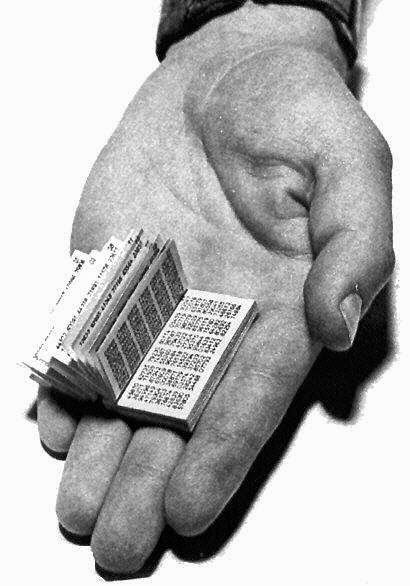 Sparks31 has written an excellent piece I am calling OTP 101.

As a communications method, the OTP simply can not be broken by anyone.  It can be compromised if your security or tradecraft is sloppy - but when used properly, it is unbeatable.

It is 2015 now, but I contend the calendar doesn't mean much, nor will it for a while.  America is at war.  In my lifetime this culture and ideological war inside our borders has been little more than grumbling, shouting, pushing, shoving, lawfare and the occasional bomb from idiots like the Dorns.

But in recent months it has been escalating along ideological lines, camouflaged in thin veils called racism, social justice, et cetera.  LEO are beginning to be hunted.  The spin is seeking to make recent attacks on LEO to be race or otherwise motivated, when the reality is obvious: It is an ideological fight between people who mean to be Masters and people who mean to be free and at Liberty, especially from the Master's Praetorian.  The rhetoric is dropping pretense at a quick pace.

This is the era of "Dropped Optics" as I predicted we would see from the 2014 mid-terms, until one side or the other in this Liberty versus Tyranny ideological war is won, by one side or the other.  I have never bothered with diplomatic nice-speak when writing on this blog.  The reason is simple: The ideological Enemies of Liberty will never, ever be persuaded to cease seeking to bind us in chains by simply using our words.  They will need a backfist.  I simply can't be bothered to play nice with a man who wants me to bend knee.

Nor can I be bothered by those stuck in Normalcy Bias loops.  Reality will fix that, not me.

The coming 6-9 months will be very busy for the Kerodins, the various III projects we have been proud to help you build, our work in Idaho.  I know many of you intend to come to the new Studio and train.  I know many of you are interested in coming to train on the mountain.  (Announcement on the specifics of that topic will be coming when appropriate, and it relates to far more than Combatives/CQB).  I fully expect to travel and train a few groups and Tribes in their respective AOs in 2015 - but not many - so if you want to get me on your schedule, do it quickly once I announce I am ready to fill my dance card.

Why mention these things in a post about OTPs written by Sparks31?

Because RevWarIII, or call it Civil War II, is just ramping up.  These are the good ol' days.  We will likely have years of deterioration, destruction, hardship, limited quality-of-life items, and fighting in the polygonal battlespace.

At some point the Kerodins will go silent in public, and it will probably happen without notice.  I do not expect that to happen during the next calendar year - but the Enemies of Liberty have more control over that topic than do I.

When we go publicly silent, I will make it possible for a trusted few of you to make contact.  The ONLY method of contact in which I will engage will be face-to-face, radio, and OTPs.  Obviously, the more sensitive and dangerous the content of any contact will determine how we communicate.  Obviously, if we have not met and had the opportunity to take measure of one another, I probably won't be willing to meet after everything goes hot.

So, my friends: Learn to use the OTP.  The only way I will ever exchange OTPs is face-to-face - so plan on making that happen.  Learn CW/Morse, because in many, many cases, the only contact I will permit is radio, and using words on a radio in a hostile world for us relative amateurs simply will not be prudent in most cases.  Meeting face-to-face in hostile conditions - the only way I will share IFF with my trusted allies will be, you guessed it, face-to-face.

So, whether you come to my AO for training and meeting to build trust, or I come to your AO to train and break bread, or you are a III Society Member who I have met and measured (as you do the same) at a III Society event, when I go dark, you will probably not hear my name again until my Obit is broadcast by Enemy media.

Nor is the OTP simply for communicating with distant allies.  It is useful among your Team(s), your Agent(s), your Intel network.

Please go to Sparks31's site, read and practice the OTP method he has graciously shared.  Make hard copies.  Put it on thumb drives and share with your allies (the methodology, NOT your actual OTPs).  Instead of a Scrabble night or a beer night shooting 9-ball, get your Team together and practice, practice, practice.

Sides have been chosen by most people who will be first on the Greens across America.

If you know who won the Super Bowl before you can build and use a OTP in the methodology Sparks presents - you simply are not serious about RevWarIII.

Here is the link to Sparks.