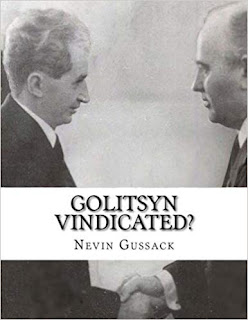 If your threat assessment is flawed about the who, what, where, when & why regarding the coming and imminent ruckus in America, your preps, training & protocols regarding the how will be neutered.

If you think any Leftist politician is a greater threat to you than your neighbor who voted for that politician, you are not even in the game.

From the book at right, Golitsyn Vindicated: After the "fall" of the USSR in late December 1991, Sino-Russo relations experienced a continued expansion of military and economic contacts.  This even reached into the realm of joint war-planning and occupational strategies directed against the continental United States.  According to defecting GRU Colonel Stanislav Lunev, the Russian General Staff held a meeting in early 1992 in Moscow.  According to Lunev, the Russian Generals "...were still committed to fighting and winning a future nuclear war against America."

"...the nuclear war plan is still on." he was told.  But there would be changes.  No longer would Russian troops be responsible for a follow-up invasion of CONUS.  Russian forces would be responsible for occupying 'Alaska and parts of Canada'.  The Chinese would occupy the lower 48 states.  In addition, certain third-world countries would be given 'looting rights'. 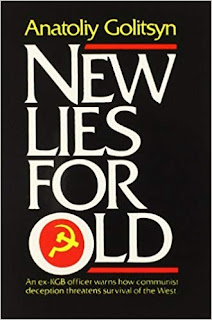 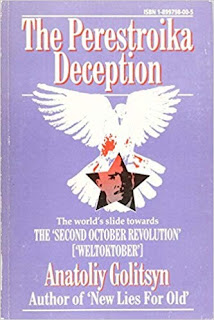 There will be no Wolverine Militia living in the woods and launching ops in town.

The ground in America and among our 'allies' has been prepared by Team BearDragon.  Our culture and morals have been corrupted, our economy gutted, our ability to build any modern materiel of war equivalent to the Liberty Ships no longer exists.  Our fighting-aged male civilian populace do not have the mettle of our WWII generation.  Armies of anti-Liberty forces continue the stealth invasion of CONUS and Western countries of Europe.  Once BearDragon has a POTUS in office who would stand down our .mil in the face of attack (Think Obama, HRC, Establishment R's) - they will likely make a move.

The only event that may deter BearDragon's plan would be a sudden nationwide extirpation of our Leftist 'countrymen'...
Posted by K at 12:16 AM