Three Men - III Patriots who started it all... 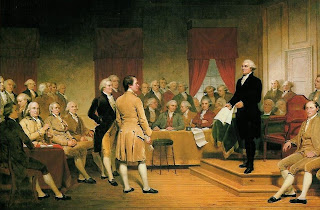 Below is a reprint of Alan Mullenax's comment regarding the essential roles played by Sam Adams, John Hancock and James Otis in getting the Revolution properly underway.  Remember that the "Revolution" was in the works for decades before John Parker went to the Green to stand before the marching Brits.  Otis, in fact, was essential in laying the ground as early as 1761 when he argued against the Writs of Assistance, which permitted the King's troops to enter any Colonists home without cause.

The Revolution was won in the minds of men before anyone ever picked up a rifle.  That lesson must be understood today.  No, I am not advocating the "No Fort Sumter's" strategy.  I do not advocate waiting until the stack is coming through your door.  What I do advocate is that you understand and apply the true strength of this fight for Liberty, which is not in that rifle, but in the mind and mettle of the Rifleman.

I'll have a post on this soon, but until then, consider: We have Patriots today who make moves like Otis and Hancock and Adams, and they get stomped for it.  We have Patriots who seek to reveal the evils we face through contact - yet such people and acts are demonized within our own ranks.  "No Fort Sumters!!" is the cry.  Well folks, tell me there would have been a Lexington and Concord without a Tea Party, without a Boston Massacre, without a Gaspee.  It is time for the timid and meek to STFU and let real men work.  It is time to move to contact in prudent measure.  It is time to rip the mask off the Enemies of Liberty and reveal the face of the evil that hunts every one of us, right now.  It is time to STFU and let our modern Adams', Hancocks', Otis', Jeffersons' do their work without all the braying of spineless sideliners.

One of our Patriots once suggested a simple, silent massing of armed Patriots.  They wouldn't have to say a word.  They wouldn't have to fire a shot.  Like Tiananmen Square, consider 100 Patriots standing tall on the steps of any Courthouse in America, with video going viral.  Consider 500 or 1,000.  For all of you who shat all over the concept of the armed DC march, do a gut check, please.  You may have legitimate nits to pick about tactical aspects of the plan or the people involved, but you can't deny it is EXACTLY the same premise used by men like John Parker at Lexington - they showed up with arms and stood there quietly, ready for whatever the Bad People chose to do next.

They did NOT cower at home waiting for the British version of a Stack, whining and finding excuses for inaction. (And don't give me any crap about "The DC March was an active event, Lexington was guys defending their home turf." - The reality is, as I stated above, those guys went where the Brits we to be found - they did NOT wait at home.  DC is YOURS.  Your local State House is YOURS.  You have as much right to be there as anywhere - and to channel Willie Sutton - that's where the evil is at...)

I'll get back to those points soon.  For now, read Alan's commentary below and ask yourself if you know an Adams, Hancock or Otis.  Look in the mirror first, please.  He may be closer than you think.  And, we need those guys, right now...

To be sure, without Samuel Adams there would have been no American Revolution.

Make no mistake, simply put, he was a street organizer. While he rubbed elbows with some of the more high brow people, his power resided in the taverns and docks.

I believe John Hancock was absolutely petrified of him at the beginning of their relationship. Tory merchant-bankers felt the wrath of Adams and Hancock worried that he could be subject to having his home and business destroyed as well as being tarred, feathered, hung from the Liberty Tree and beaten. Consequently, Hancock became the money man for the Sons of Liberty for the most part. He really grew into the role of a Founding Father. Were it not for Adams, I'm reasonably sure Hancock would have worked for reconciliation with the king.

It's important to understand that Adam's did get people killed. The Boston Massacre was more than likely his work and he was in Lexington the night before the Green with Hancock and no doubt conferring with Captain John Parker. The Boston Tea Party, while no one was killed, was most certainly his work as well.

Along with Hancock and to a lesser degree James Otis, Adams formed the nucleus and impetus of the American Revolution. That nucleus and impetus resided solely in Boston but incited action in all of the colonies with the exception of Georgia for the most part.

The take away? Three guys. Three guys pushed the issue and created a rebellion. We talk of three percent. The reality is it was probably just three guys.

Take Hancock out of the equation. He was intimidated by Adams and grew into his role. However, the other two of the triad, Adams and Otis? One word, visceral. They absolutely hated the Crown. Those two guys felt personally wronged by it and spent every waking moment plotting and planning to insure independence.