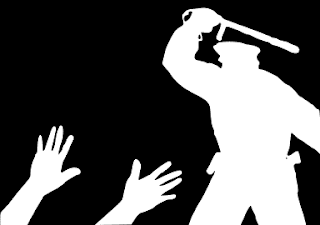 How many of the people reading this blog were walking around the neighborhood when they were 13 years old, carrying a real handgun or rifle?  I know I did.  No one lost their minds.  I was one of many.  Granted, I was in a county populated by farmers, watermen, hunters and other folks still possessed common sense.

When children are being murdered in the street by uniformed members of Government, under color of law, for carrying plastic toys, it is time for a re-boot in our society.  The boy was walking down the street.  He was not, obviously, shooting anyone.  He was no threat.

Where I grew up, if something like this had happened, the LEO involved would be treated as the threat and handled accordingly.  They would have been met at their homes by real men who don't tolerate animals in society.  The cop shop would have been burned to the ground.  The next person wearing a badge in the county would understand that children are off limits.  The next person who wore a badge would understand that they work for a community that will not hesitate to put his dead carcass under the corn.

I wonder if those times, those men, are gone forever...