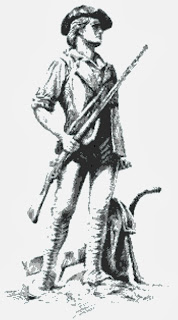 Things have been quiet on the public front of the Citadel for a few months, but there has been considerable movement under the radar.  Time for a quick update.

III Arms:  Any Citadel conversation must begin with a III Arms update.  While I am not the best person to give such an update, I do have enough knowledge of what is happening with the company to share what is publicly relevant.  Jim Miller, President of III Arms, has worked remarkably hard and smart since volunteering to take the helm at III Arms.  In less than a year from the time he started accepting orders, many customers have III Arms rifles in their hands.  The pictures I have seen showcase the craftsmanship and dedication Jim invested to make III Arms more than just an idea.  He has made III Arms a company that delivers product.

Reviews from those who have received their rifles are positive.  You'll see some of those reviews and rifles in the coming weeks or so when the company puts out its first promotional video.  I'm not sure of the current status of the 1911 orders on his workbench, but I know a few weeks ago he had all parts in-house, except slides which have been slow since the post-Sandy Hook industry meltdown.  They may already be in, I don't know for sure.

Recent silliness about the III Arms trademark is just that - silly.  There are a few stupid people who make gun parts and think they can take a shortcut and profit off all the hard work invested by Jim and all of you who supported the III Arms effort.  They are wrong.  But that fight isn't really for online.  One thing that you probably know about Jim, Holly and everyone else who supports III Arms - they are not afraid of a fight.  Whether face-to-face or in court, they don't back down when they are being wronged.  They will never back down when it comes to defending the people who made III Arms possible.  Some people simply need to learn lessons the hard way.

Idaho:  If you read this blog often you know the Idaho PatCom was a wonderful success.  Patriots from all over the country traveled to meet one another atop a beautiful mountain at the III Arms site.  Many of those people are in various stages of wrapping up their homes and moving to Idaho.  Several of those people are entrepreneurs, and are bringing their companies with them.  I am looking for III Pioneers to begin streaming into the area next spring and putting down roots.

To that end, as I have mentioned briefly before, Holly and I have decided we will spend the winter in the area.  We will continue to meet the folks who call Benewah County home, every one of which has been nothing but kind and welcoming to us.  We have decided that we will open a small business in town to help introduce ourselves.  My personal thanks to everyone who was recently contacted in email.  You know who you are, and what you mean to me and Holly.  More on that later, when the time is right.  Which reminds me, I need to talk to a man about a website...

If you are planning to move into the area, Holly and I are happy to serve as your eyes and ears on the ground.  Touch base with us and we can help look for suitable homesteads for your family, or locations for your business.  When you come for vacation, we'll be honored to meet up with you and help in any way we can.  Right now the most important facet of advancing the Citadel concept is to have entrepreneurial Patriots come and settle in the area, bringing jobs with them.

Predictions are for a snowy winter in the area, which appeals to me.  I like the snow.  If you are planning a spring or summer trip to the area, we can guide you to the III Arms site if you want to camp.  It is beautiful, quiet, full of game to make hikes exciting.

The only sour note in our mouths comes from this past springtime.  We had intended to begin developing the III Arms site last spring.  However, two very significant companies wrapped us up in talks for a television series that dragged on far too long, and we missed our window of opportunity.  We won't make that mistake again.

If you want to support the people coming to Idaho as part of the Citadel principle, the best way is to join us out there.  If that isn't in the cards for you, then ordering an AR or 1911 from Jim at III Arms company directly contributes to the success of the project, while putting a world class fighting firearm in your hands.  The next time you head to a 2A rally or event, having a III Arms firearm over your shoulder or on your hip will tell the world where you stand, without having to speak a word.

My personal thanks to you all, to everyone who has supported III Arms and the Citadel.  Whether you are a Founder, an owner of a III Arms firearm, or simply someone who has given moral support, none of these successes would have been possible without you.  III Arms is a company that tells the world that III Patriots are more than talk.