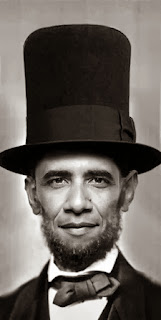 I don't spend much time writing about individuals of the regime.  There is no point.  They are replaceable.  They are the Wizard, not the man behind the curtain.

However, I have two quick points that are relevant, and important in coming to a proper analysis of what/when/why things will happen and unfold.

Item Two: In his narcissism, this man truly believes he is the heir to the throne of the world.  He believes himself capable of finishing what Lincoln began, but then taking it to the next, final level.  This man believes that Divinity has put him in this time and place that so surreally looks like 1860 for a reason.  It is important that you understand, this man truly believes He is the One, that he has a Divine and moral Mandate to be rid of you and your bitter-clinging ideals.

He is not a pragmatist.  He is not a cunning realist or mere politician.

He is a True Believer - the Truest Believer in the Church of Obama that exists.

He thinks this is all ordained, and that it is his moral duty to finish the transformation of America.

He will never stop.

He will never negotiate.

He will never Reason.

He will always seek the EndGame, no matter what happens between now and then.

Understand that what is happening now is dual-pronged.

First: The Enemies of Liberty think the timing is good.

Second: This man truly believes He is the One.