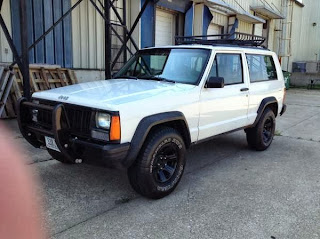 There is much territory to cover between now and the time I get busy setting up the Jeep for its proper role.  What I call our "Shakedown Cruise" went pretty well.  The truck was sold brand new in Iowa, lived it's entire life in the same town, averaged 6,400 miles each year, and was never abused.  Holly and I have put a bit over 4,000 miles on it sin the last 5-6 weeks.  We are averaging 20.5-23 mpg highway (which blew my mind, because the original EPA rating was for 18 highway, and we are loaded down with an extra 1,000 pounds of gear, Akita's, etc.)  We had the 4psi radiator cap issue that has been resolved.  One of the Goodyear tires separated, and the kid we bought the truck from used rims that were not quite right for the Jeep, so we currently have a mishmash of rubber - no biggie, 4 ply tires don't live long in Idaho, so we planned on going to 8 ply anyway - we just would have preferred doing it on our schedule.  We'll get a package with rims at the same time, and proper spare.

Anyway, when I get around to outfitting and modifying this Jeep for its intended role, would it be at all interesting for you folks to see what we do, why, how, and so forth?  I am no gearhead - the thrust of the posts would be outfitting the truck to be a III capable machine.  I'm a Warn guy, so everything we upgrade would be Warn.  I have no idea if we'll do anything like changing axles, et cetera - that's where I'll need advice from you guys who know what you are talking about.  I'm certainly not going to do a lift kit, and I'll probably even go down in tire size closer to OEM.  (the kid who put on the Goodyear's went to P235s).   I've owned 4x4's since I was able to drive, always Jeep or Chevy, and I can change tranny's, transfer cases, even engines if it is a straight swap - but that's monkey-see, monkey-do.  I make no claims to having any real automotive skills, especially diagnostic skills.

I'd probably set it up on its own blog just to keep things neat and tidy, but maybe it would be a useful ongoing topic of who is choosing what rig, how they are outfitting, why, and so forth.