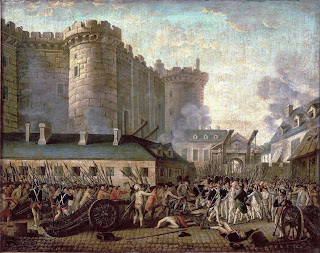 During our discussions over the weekend, I briefly made mention that our Framers watched the French Revolution and became motivated to wrap up the still-open political wounds in America as quickly as possible.  Remember that the French stormed the Bastille in late 1789.  It did not take keen senses to see that the Revolution coming to life in France was to be an ugly affair, with a level of violence that much of the colonies had - thus far - escaped.  But they knew that North Carolina, Rhode Island and Vermont had not yet ratified the US Constitution.  Several very vocal anti-Constitutionalist Founders began to soften their tone and in many cases, even endorse and support full ratification.

This happened because our Founding Fathers were very wise men with a nearly prophetic ability to see what is and what may come.  They knew that American political wounds were still angry and only beginning to heal in some places.  In other places, there was still discord.  There remained the embers that could flare-up to engulf the colonies easily and unwind all the advances that had been made for individual Liberty.  They knew we could still devour ourselves.

In those early days of America, when the ratification process was still happening, the Framers were very, very careful to use a single thread to bind all of the colonies together and all of the men in those colonies, whether Bostonian or Virginian or Carolinian, the thread being used by the Framers to join us all as "Americans" was not God, it was not trade, it was not color of skin or one's lineage - it was our mutual respect for individual Liberty - Jefferson's Rightful Liberty.  Make no mistake, those other common traits within the colonies (religion, trade, common European background, common language, etc) were all helpful factors - but what would make the man from Georgia walk to Boston and stand shoulder-to-shoulder with a man from Massachusetts was the mutual respect for one another's Rightful Liberty.  That was our common bond.  (It is no coincidence this is the same common bond we have established for the Citadel.)

In America today, Bad People have managed to replace that common bond with squabbles used to separate us rather than unite us.  You and I know this already.  You and I understand that America missed the horrors of a Reign of Terror by the skin of our teeth when our republic was birthed.  And while you and I understand the need to do what we can to avoid such unrestrained reprisals in the coming North American Liberty Games, we also understand that we are among the smallest minority currently occupying the American political space.  If even a small percentage of Americans decide to begin burning their political enemies from home and hearth, and hanging them from lamp posts, one would have an easier time stopping the incoming tide with a spoon than to stop such mob violence that will take a life of its own.

This coming weekend in Washington DC is being watched very carefully by many of us.

Given the political climate and the sense that many of us have regarding the intent of Evil People, these groups in Washington this weekend, especially if the .Gov remains in "Shut-down", combined with the willingness of Evil People to not only use a crisis, but to create a crisis - this coming weekend in Washington DC may become a real "Thing".

In 1776 the nature of the American man and woman was different than today.  The nature of American political leaders was different.  Men like Jefferson and Franklin and Henry and Adams are usually limited to once in a generation, and by that I mean, you may have a Franklin in Gen X and a Jefferson in Gen Y, but good luck ever having another Perfect Storm that put so many such men together in one place, at one time, as happened at the birth of our nation.  Today, we do not have the ability, I fear, to stop an American Reign of Terror if violence erupts.

I am undecided at this moment what my weekend may hold.  I will watch and determine as we get closer if my presence with a camera and internet link may be of use in the heart of the city.  If I decide to venture into the city and some of you plan to do the same, we can create a muster point if desired and ride this wave together.

For now, let's watch and see how the Enemies of Liberty seek to lay the ground.

They may choose another time or place.

They may seek an epic American weekend.