I'm about half-tired of people pointing weapons at me...


Israel's family had their first run-in with life under ObamaCare.  It ain't good.  If you have had any contact with the medical system since ObamaCare officially started, feel free to share any helpful information.

The poster above articulates what I have written many times: Every law on the books is, ultimately, enforced by the muzzle of a weapon.  Period.  Full Stop.

I was born with Asthma.  When I was a kid I spent a fair bit of time in oxygen tents, trying to breathe.  There were no inhalers at the time.  They did not exist.  This was at a time when the medical world had not fully embraced the concept of allergies. (I sh*t thee not - my pediatrician at the time did not believe in allergies - it's one of those paradigm-shifting moments just like when doctors did not know about spreading germs - as recently as the Civil War.)  Fortunately for me, Children's Hospital in Philadelphia was available and was ahead of the curve.  You may wonder how I managed to become proficient in martial arts with asthma hanging around my neck - it is called tenacity.  ;)

I am on a cash basis for my medical care.  I have a burr under my saddle regarding the insurance industry that is almost as big as the burr I have regarding "big-government".  I try to stay outside of the insurance game wherever possible.  When I need something, I go see my doctor, and I pay her.  When I need meds, I go pay for them.  Yes, they have tried to make it very difficult for people to remain outside the insurance-paradigm for generations, and now it is apparently going to be much, much worse.  For if I refuse to enroll in ObamaCare (take a guess where I stand on THAT spectrum), and I refuse to pay the "tax" (take a guess where I stand on THAT spectrum), what happens when I need a new inhaler?  For me, rescue inhalers are not optional - they are not a butter item, they are a guns item.  Given the right set of circumstances I will die without them, and it will not be a pretty death.  Ever watched a fish die on the dock trying to breathe?  (by the way, do they even still teach "Guns & Butter" under that name anymore in school, or is it some PC-titled silliness in economics classes?)

Will my doctor be forced to turn me away from her practice when I call next time?  Will I be able to get a prescription for new inhalers?  If I manage to get the prescription, will the pharmacy fill it if I am not enrolled in ObamaCare?  Have the people in my government now pointed yet another weapon at me and told me that if I will not bend knee and play their reindeer games, I will not be entitled to life-saving meds?  Have these people in my government now put me in the position that I must pick up a weapon and become a criminal, simply to score a $20 inhaler (retail!) so I can live?  When I was young my asthma was triggered by allergens - and I have plenty.  Over the years I have built tolerances and endurances, but I am not "cured".  As I have gotten older my asthma can be triggered in the absence of allergens and merely by an abrupt change in temperatures - such as walking from a nice, toasty house into a cold, dry winter day.  Once I push-through my initial "flare-up" (either with a rescue inhaler or by just being determined and measured and suffering-through) and catch my second wind, all is well and I am good to go.

But I promise you - no inhalers = death sentence - and I refuse to be murdered that easily. 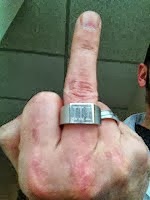 I have tolerated their meddling in my healthcare to date - I have played by the rules and gone to my physician and rec'd the government-mandated permission slip to buy my meds.  But they are now taking this to another level.

We speak often about the ability to use food as a weapon.  It is no joke.  Now consider how many people in your life would suffer needlessly without their prescriptions, or simply die.  That is no joke, either.  The Kerodin Doctrine of Self Defense is invoked if they begin pointing weapons at me when I try to buy a simple inhaler - or when your wife needs a mammogram, or when...

Here's the link to Israel's piece.