How many felonies would you commit if you decided to live in a state of Rightful Liberty for one single day?

Think about it for a moment.  Think of all the things you do every single day for which you must first acquire permission - whether it is riding a motorcycle, installing a light socket to pay your bills as a "Licensed" electrician, owning a SMG noise muffler, taking a pill for pain.  If you refuse to acquire the proper permission slips, how many of the things you do every day are outright felonies, or may rise to the level of a felony at the will and whim of LEO, a magistrate, prosecutor or some bureaucrat? 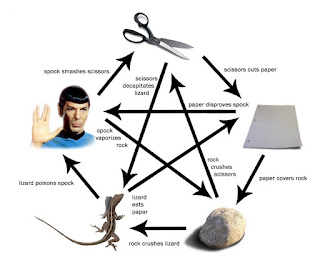 Think of all things forever forbidden to you and your children, for no permission slip exists.

In the past we discussed a few of the Universal Laws under which Nature and Man operate.  Add to those discussions the awareness of patterns.  There are patterns in Nature and Man, and among men.  Learn the patterns and you can learn to avoid certain errors and how to influence certain outcomes. 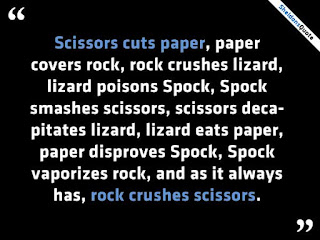 Two martial equals will usually kill one another if they fight.

Two equals in tic-tac-toe will always play to a draw.

Two equals who know one another will usually play to a draw in rock-paper-scissors .

And even when the game is made more complex and nuanced, such as rock-paper-scissors-lizard-Spock, two equally adept players who know one another well will usually play to a draw.

The patterns and rules that have been constructed by Evil men for their advantage (and that of their genetic and ideological posterity) in life can be gamed if you learn the patterns and then use that knowledge to your advantage.  Learn the patterns, identify the tools they use to manipulate you, then invoke your Sun Tzu and Musashi and attack in a place, manner and time where your enemy does not defend.  Military folks will call this f'ng up his OODA loop.  Most people just call it common sense.

But how does the American who was born into this system of rules and conditioned every day of his life break out of the paradigm and into Rightful Liberty?  Hint: You do not build a Ma Deuce in your basement and then go riding with it on an unregistered motorcycle as Step One.  Not one of us remembers an America without NFA.  Most of us are conditioned from our earliest years to covet the day we can go and receive permission to drive - to exercise the Right of locomotion.  Most of us know the phrase tax cheat is received by most people as an epithet.  This is all conditioning by Evil men, institutionalized across generations.

First you must understand that what you want is yours to begin with, what you are being denied is your birthright, and that morally you are entitled to reach for it, possess it, and use it.  That is where you must begin, by embracing that you are being wronged, and that you have a moral Right to end the abuse.  And dismiss that Moral High Ground silliness - you have a Right to your Rights by any means necessary.  The man between you and your Natural Rights is a man who chooses to stand in a perilous place. F' him.

Once you have embraced that you are morally right to pursue and take possession of your Rights, start small.  One does not watch a DVD, call that training, then step into an MMA ring.  Even the most elite men in our military are not on leave at home on Friday at a BBQ, HALO jumping into the Bin Laden compound on Saturday, and back home for Sunday dinner.  There is a process generically known as "Clicking On" in which even the most highly trained fighters methodically ramp up in preparation for a piece of work, an ever-increasing isolation and focus that pares away everyone and every thing except the Team and the Mission.  And once the mission is over, there is a ramping down, a deliberate process to "Click Off" so that the Operator doesn't double-tap his father-in law simply for waving a steak knife around at the dinner table.

(Those of you familiar with the world of martial Japanese arts know the "Clicked On" state of mind as Zanshin.  There may be many years between your first brush with Zanshin until you feel it again, but as you train, it comes easier.  If you are truly gifted and dedicated, there will come a time when Zanshin is your default, running silently in the background of your awareness, ready to come into focus at will.  Being "Clicked On" is not genuine Zanshin, obviously, but it is a fundamentally efficient simile for the purposes of fighters.)

This ramping up/down conditioning is not only in the military community on a mission-by-mission basis.  Soldiers do not leave Fallujah today and get on a Greyhound for home in Topeka tomorrow - they ramp down through several deliberate, refined steps before returning to the world.  Nor is this conditioning process exclusive to the military.  Prisoners who are due to be released may begin the process of "stepping down" several years before they are to be released.  They are transferred to prisons that are less hostile and dangerous until they are ultimately sent to a "half-way house".  You do not go from a High Security prison where every hour is capable of being violently your last, to being released at Denny's.  The Human animal is not equipped for such rapid decompressions.

Knowing that .gov employs this particular process is good information to have - because it may allow you, perhaps, an insight to their thinking and their likely actions at some future time or during some future event in which you must anticipate their actions.

So, how does one break down the artificial barriers that have been in place since birth and re-enforced through life, barriers that have the singular function of keeping you from daring to reach for your Natural Rights?  We have spoken before of training by choosing a particular misdemeanor every day and violating it.  Violating it without getting caught is valuable as training for tactics and strategy.  However, the more important value, is that such violations help re-wire your brain and condition your psyche to become comfortable in daring to go where you have not gone before - into the realm of criminal.  Train, and ramp up until you are free.

Max has suggested you begin simply by "Standing Up" - what John Parker phrased as "Stand your ground."  That is as good a place to begin as any.  Then begin using the word "No" more often.

You can not live at Liberty in America today without becoming a criminal.

You will never know Liberty in America without dismissing many laws, committing many felonies, and being willing to physically fight the men who mean to stand between you and your Creator.

Every day.  Every single day you must become harder, smarter, less affected by the taunt of Criminal!  You must become immune to the stigma of their labels.  You must take more responsibility for your own Liberty, for it is your Obligation to defend your Creator and His gifts to you.

You must break their rules.

Or you will remain upon your knees, licking the hands that feed you.

That is not a life worth living.