When a person shows you who he is - believe him...

**Quick Update**  A few people have written to ask about the III they have engraved on their personal arms, or such decorations.  Individual Patriots have never rec'd a letter from III Arms, nor will they - this matter is between two businesses.  Remember also: III Arms is not a for-profit firearms company.  All "profits" are used to benefit the Citadel project - not to go into the pockets of some guy who runs a company and feels it is necessary to put this disclaimer up regarding a III symbol: The Picture above is not meant to portray any political belief of Red Dot Arms Staff or Ownership.

I am a big fan of Ruger firearms.  I'm not pleased with the politics of what Bill Ruger did years ago, but I have owned and shot many Ruger offerings and I have never been disappointed. I am particularly fond of the SP-101 5-shot .357 revolver, with Hogue finger groove grips.  I owned one in my mis-spent youth, and it served its role as secondary sidearm very well. 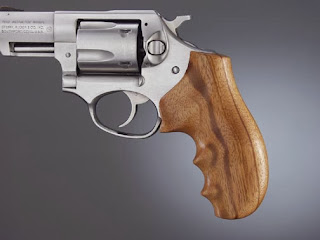 Some of you know that Mike Vanderboegh has a personal dislike of me that has become a compulsive disorder from what I can tell.  Now he has gone and used his persuasion on an Alabama gun maker and convinced the shop to start putting the III Arms Trademark on their firearms and accessories.  You see, we live in Mike's head, rent free.  He can't stand a successful III endeavor, and tries to undermine as many as he can.  He's simply not happy if he isn't ripping the community apart.

So, he looped this dummy at Red Dot Arms into tagging his guns and accessories with the III Mark owned by III Arms Company.  Are you listening Randy?  The emails you received were polite, informed you that you were using a registered Mark in violation, and to please stop.  You told Holly that you did, in fact, stop.  So, you are also a liar.  I see on Mike's page that he thinks you have "sufficient differences" in your symbol from the III Arms Mark, so you are safe.  You added a circle of stars around the Registered III Mark.  I did the same thing to the Ruger logo above.   I'm sure a gun company would be quite safe using my new Ruger logo.  Go ahead, Randy - put the Ruger logo on one of your uppers and see if the Ruger lawyers agree with you - that adding stars is "different enough" to stop them from suing you into bankruptcy.  You are going to lose your company, Randy.  If you have a lawyer who is advising you to go forward, try this: Go to your lawyer and have him sign a paper that says if he loses at trial (This WILL go to trial) that HE will pay for all judgments and penalties and fines.  Heh, he won't do it.  You are going to lose your company.  Treble damages will be ordered, for you continue to operate in bad faith.

Randy: Write the proper people at III Arms, apologize and work out the issue.  If not, they will turn it over to Lawyers, and those lawyers are really eager to have this case.

Mike: You remain one of the saddest Souls I have ever known.  But I can't help you any longer.  I have held my tongue and my actions long enough.  In this action you have revealed to the world how petty and insignificant and irrelevant you have become to the Liberty Movement.  You have revealed yet again that your only goal is to destroy and disable progress.  This time you seek to harm Randy at Red Dot in your evil desire to somehow best me, but worse, you also seek to destroy the efforts and dreams of nearly 50 Founders of the III Arms Company, Patriots all, and all they wanted to do was build something tangible for the Patriot Community that provided positive forward motion of our goals.

You will not be allowed to injure them, Mike.

Several times at your blog you seem giddy at the prospect of having me under oath in Discovery.  Once more you prove that what you don't know is more dangerous than what you do know.  You see, you will never get me under oath - not because I am afraid of you, but because I am not party to the games you are trying to play.  I like to think of myself as III Arms Company's best cheerleader.  But, what I am not, is a member, employee, consultant, janitor or in any fashion part of the companies you chose to fuck with.

So, as you fail to get me under oath, you did ensure that you will be under oath for tortious interference.  Oh, yeah.  That's a bad one.  That is going to leave a mark.  You've satisfied every requirement for a tortious interference charge.  Congratulations!  Did you think about that before you decided to gamble every asset you own, including the home your wife should have lived in after your death, in this amateur attempt to diminish me in some manner?  You are as sad a tactician and strategist for revenge as I am certain you are on the field.  Thank God you won't be getting Patriots killed in the Liberty Games.  See you in court, Mike.  I'll be in the gallery, not on the witness list.  Thank you for the new bay window at the house - paint it white for me, please.

Go ahead Mike - time to start begging your readers for more money to hire a lawyer against the big, bad Kerodin.  But it isn't against me. I'm not the one coming. You couldn't handle it if I were coming.  You did this to yourself, again.  You fucked with people who run companies that had never done a single thing to harm you.  Once again, you lose.  Once again you hurt the community.

Folks, I won't be commenting on this matter much at all.  Once the lawyers take over, it needs to be handled by them, without my running commentary.  Besides, we have many projects in play, and my attention is elsewhere for the winter.  Come springtime, there will be considerable activity in Idaho among several families!  Stay safe!