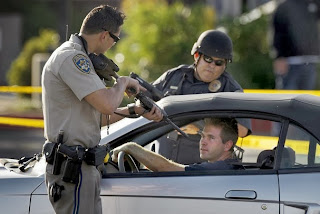 What do you think would happen across America if scenes like the above, including DUI checkpoints, VIPR checkpoints, et cetera, were met with self defense tactics that include return fire from inside vehicles, fire from passing vehicles and pedestrians, and sniping from concealed teams hastily taking position to do so?

I mean, what would LEO response be on the street level?

What would local and state level political response be?

What would National level .Gov response be?

What would be the prevailing attitude of the general public (assuming shooters used proper muzzle control and only hit LEO, no collateral damage)?