Josey Wales was a III Patriot 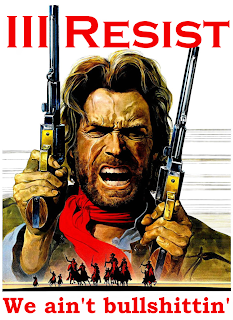 I must admit that I simply can't grasp that notion - my mind simply can't comprehend such intense desire to stay alive that one would surrender every shred of dignity.

But, it exists.  Indeed, it is probably the most common baseline among mankind - suffer any indignity or injustice, just let me remain alive!

I know it exists, my brain can grasp the edges of the notion, but I'd be lying if I said I could understand it on any level.  Indeed, it offends me on a visceral, ancient and primitive level.

Perhaps I am the one who is less evolved?  My kind tend to die younger than most, and violently.  We tend to meet challenges head-on with a f*ck you attitude.  I would rather die than suffer indignity of slavery.  Or, perhaps, Mother Nature has simply cursed me with the Alpha 'gene'.

I have more for which to live now than ever before in life - Holly.  But she and I understand that a life of humiliation or indignity is not life, it is simply waiting for death.  To that end, as I have been discussing here on the blog for a while now, counting angels on pinheads is an absurd behavior.

Neither of us know our "purpose" in life, if life even has such structure.  We know that we are called upon deep from within our Souls to aid our friends.  We know we have an obligation to defend Liberty.

There is a shift taking place here at III Percent.  Most of you have sensed it.  We are leaving very soon for the Redoubt.  There we will meet and greet many of you who are coming.

And to each and every one of you who seek to impede or interject yourself into my business, no more warnings will ever be issued.  And don't act all surprised when you suddenly realize I'm the bastard behind you at Starbucks.  We will be having a conversation.

My thanks to Grand Master Jedi Zoomie for the Josey Wales - awesome as usual.  I need to find out his favorite beer, I know I owe the guy at least a pallet by now.  ;)