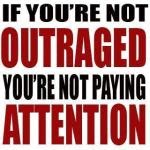 Someone I respect more than most is Alan Mullenax.  Sorry Alan, I know that is not going to help win you any new friends.

Alan speaks often of Henry Adams (my bad, thanks Alan), Hancock and Otis as being the three men who were the sine qua non for the Revolution.

With Otis and Henry (Adams), Alan explains why they were so pivotal: They had real, genuine hatred in their hearts.

When I look around today, I don't see hatred in the hearts of my Countrymen.  I see some annoyance.  I even see anger here and there.  But what I see mostly is - meh.  Whatevah.

In an email the other day someone said I was "angry".

I am not angry.  That gave way to outrage long ago.

What I have now is a seething hatred.

My emotion is in check.  I'm not ramming planes into IRS buildings.  I'm not storming Athens, Tennessee.  Heck, I'm not even speeding when I drive.  I have trained for decades to channel such emotions into lucidity in confrontational situations.   You might not like my direct words, perhaps they strike a bit close to home?  Sometimes when I comment in dialogue, I use big-boy words.  Does that offend you?  I don't really give a shit.

But you know what - when I look around, I don't see hatred.

If you can't muster some good old-fashioned Fuck You hatred for people stealing 70% and more of your money and telling you what, when, where and how you may behave, and claiming ownership of your children...

That's called bending knee to lick the hand that feeds.

If a few guys don't embrace and channel that seething hatred, really soon, the window of opportunity for Liberty will close.

And if you can't muster much more then meh, well...God may forget ye were my Countryman, but I will never forget your cowardice or treason.