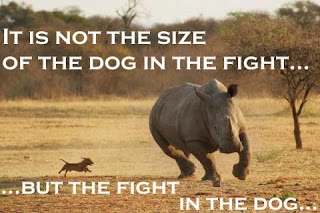 Israel (The Steel I-Beam) has found a Krav studio near his temporary work AO, and has dived in.

He's taken the time to share a bit of his experience, which is nothing less than a golden nugget, a beautiful, valuable gift, that he is willing to share.  I have mentioned that at least one other member of his Tribe has done the same, so when these folks all get together, they will be in a position to have our two III Patriots take point on CQB studies within the group.  Nope - a day at my CQB class and a few months in a Krav studio will not make you a world-class, fire-eating, cage monster ready for a Vegas event - but you'd better believe it will make you ready for 99% of humanity who might be so foolish as to try and lay their hands upon you.

Most of humanity has zero experience with real fights.

Pay particular attention to the portion Israel discusses going hard for 30 seconds on the mitts.

This is where most fighters die.  They run out of gas.  They have no wind.  The ability to keep your arms up in a defensive position, literally, becomes impossible once you pass a certain point of muscle-exhaustion.  If you can't defend yourself longer than the other guy stays on his feet swinging - you will die.  And if you think that empty gas tank is at least 5 or 10 minutes away in a real-world fight, and you haven't tested that theory - well...

Work on your wind, folks.  Israel is a man who is far more conditioned and fit than most we will find in our trenches, and he tells you what 30 seconds of non-stop swinging is like.  Believe him.  If you don't choose to believe him or me - go to a gym, find a heavy bag, and simply go hard, full speed, on that bag with punches, elbows, knees and shin kicks.  Ask someone to time you, and give them a stun-gun to zap you when you cheat and take a breather.  If you want someone who won't let you cheat, give the stun gun to your young son or your spouse.  ;)

I promise most of you will not be able to go truly hard for 30 seconds, and you will feel it tomorrow.

...against a target that will not punch back...

...against a single target, not 3 grown men who mean to have your wallet and wife...

How can you Resist if you don't have Endurance?

You've got to learn to grind it out, emotionally and physically, when the enemy comes and the world looks bleak.  You have to make yourself as unassailable as possible - so if they attack, you have the ability to outlast them as they break their bones against the rock that is your will and determination.

There is only one way to do that folks - you have to go do it.