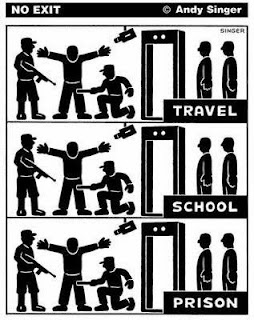 The Daily Smug has a piece today about school officials threatening parents with "Child Welfare" interventions if they fail to do X or Y for their children.

This story is simply one more instance of the aggressive pace the Enemies of Liberty are using to condition the American populace.  I don't need to put together a long train of abuses to illustrate the point - other bloggers have done so, and to be honest, if you can't see it by now, I can't help you.

America has become a Police State in the classic definition of the Cold War vernacular.

Those who mean to be Masters are in control, and they use the power of the State to force compliance to their commands.  If you fail to comply, from paying property taxes on your home to feeding your children the bag lunch they demand you pack, to any of thousands of other commands, you will be met with the force-projection assets of the State and you will comply, or die.

Owning it does not mean you have to accept it, or tolerate it, or bend knee.  You decide how you will live, and if you are lucky perhaps you will have some control over how and when you die, and why.

My fellow III Patriots, I am going to ask of you: Adjust your stance and acknowledge that you and yours are now living in a Police State.  Accept that it has happened - not that it will happen if we keep going down this path, or that it might happen if...

We are here.  This is what was known to the East Germans and the Soviets.  Ours is as brutal, as detached from Rule of Law, even if the level of fear has not yet reached the saturation point of the general population.  But saturation is inevitable, it is a goal currently being pursued, and the only hope that remains for your children is that you accept that the Police State is our reality.

My writing in the future will only be useful to those who accept that we are now fully embraced by the American Police State.  I have no room for "if" or "when".

Own it.  Prepare to defend yourself.

I have rebuilt Kerodin.com and added it to the blogroll.  Some information will be better suited to that venue as we go forward and the III 300 need to communicate.