Purpose of the III 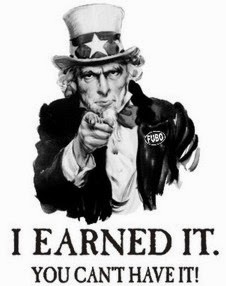 People who do things and advance causes end up at the front of the pack, one way or another.

People who believe in genuinely accomplishing goals end up walking with those people who do things to advance.

Some people simply like the way it feels when they sit on their thumb and spin.  They whine and cry as they are passed by real men.

The III Patriots who routinely come to this blog are achievers in life. They rise to high levels in their chosen professions.  They become Team Leaders.  They become entrepreneurs.  They take point.  They become respected because that is simply how Mother Nature programmed the world - to respect accomplishments.  We do things.  We do not whine.  We do not make excuses.  We do not try to blame others for our own setbacks in life.

Be that guy.  Be the guy who shows up at a CQB class, then goes forward and burns thousands of calories in Krav building muscle memory.  Be the guy who learns the best way to grow a garden is by getting his hands in the soil and doing it over and over until he gets pretty good at it.  Be the guy who knows how to tourniquet his buddies leg and then drag his ass to cover if ever needed.  Be the woman who can help patch that guy up, return fire, and make a hell of a peach cobbler when she wants to make a cobbler.  Be the guy who lays on his side, head pressed uncomfortably against a curb, in the cold rain shooting your sidearm off-hand under the car at a target 25 yards away - just because.  Be the guy who knows what the hell it means to be a real man.

Be the guy who knows thousands of men are depending upon him to build the Stoner AR, gets a CNC in his garage (having never even turned on a CNC before), and within months is shipping fighting rifles to Patriots.

Be the guy who takes a long, deep breath when life sucks, then gets back to it.

Next time you meet an honest-to-God Navy SEAL or Green Beret, ask him what he'd do if he saw some poser wearing a SEAL patch or SF crest on a jean jacket at a shopping mall - some snot-nosed kid who never rolled out of bed before noon in his life.

The world is getting very real, folks.  It is time to police ourselves in the III.  It is time to cut the waste loose and keep them out of our business.  It is time to close ranks and give the posers the backs of our hands.  This is not a f*cking social club.  When you find a piece of garbage wearing a III patch - take it from him.  Being a III Patriot is to be earned, not simply ordained by some fat man with a King complex.

Time to man-up.  You know a poser when you meet him.  Do something about it.