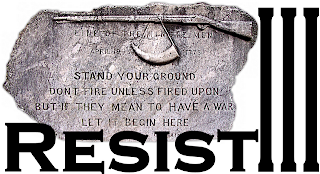 Sometimes when I write people think I am talking directly to them in subtle and veiled terms.

I'm not doing that in this post.  This is just a random thought I have decided to put out there.

I'm not sure why, but a vast majority of people seem to think everything in the world, from office politics in the business world to being annoyed over someone who stole a parking spot, to impolite chat on blogs about Communism in America, is all just fun and games and schoolyard trash-talking - right up until the moment they get that stupid "That motherf*cker just stabbed me 19 times in the neck!" look on the face of their half-decapitated head.

Far too many Americans simply think they'll never be touched and held accountable for their actions.

Too many people simply do not understand that Nature is only in balance when people are held responsible for the words out of their mouths and typed by their hands, and the actions they take.

Far too many Americans think they can say anything they want, either in person or online or wherever, and they'll never know what it feels like to eat a backfist, or never learn what a garrote feels like as it slices into the meat of their neck, or never know what it feels like to have their guts spilling on the floor while the person they were arguing with in Starbucks simply walks away, gets in a car, and goes for a shower.

Too many American Human Beings fail to understand that Mother Nature simply didn't rig the system that way.

And what happens when one stupid person pushes the wrong guy too far?  That is happening all over America right now.  The learning curve is going to be steep and unforgiving.

Payback is going to hurt.  There will not be any warning.  It's just going to be a backfist, a shovel, a shower, and then a good night sleep with one fewer lippy, stupid putz fouling the air.