The III must evolve... 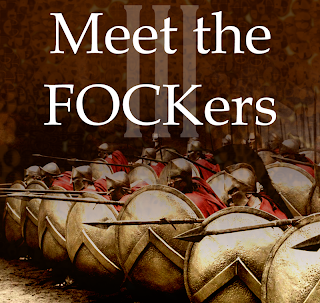 "The FOCKers" was created by MBV as most of you know, meant to be a slur. (Friends of Christian Kerodin)

Another Fail for Mikey.

In a very short period of time the image above from Zoomie has become my favorite - and I have a LOT of Zoomie art with which I am in love.  But this one is more than just an FU - it also captures who we are, brothers standing in phalanx covering one another, with a single goal, against overwhelming odds.

Like Leonidas and his 300 at Thermopylae, those of us III 300 today probably will not live to see Liberty restored.  But without us, without our taking point and choosing to do the Hard Things, Liberty dies.  The Second Wave will have no chance.  They will not have the manpower or the moral mandate or the popular support.  Only we III 300 can bring that to life.

I do not have to point out the names of our modern Ephialtes'.  I should not need to remind you to be careful, and trust only those people for whom you would die.

When I say the III must evolve, I mean the positions we take, the lines we stand upon and hold, and the charity and mercy we save for our own first.  I will write on this soon, and I will take point. I will return to meet many of you on our way back to Idaho.

Delayed gratification.  That Second Wave of Spartans fought for the same reasons as the first, with one more burning in their hearts - they fought for their King Leonidas and his 300, and their Queen, Gorga, Daughter of a king and mother to Leonidas son.

The America I love has been invaded.  It has had its moral core eaten from within.  It needs her heroes and Patriots.  The enemy looks like us.  They claim many of the same symbols as do we.  They hold claim to the Liberty in your heart, and in your baby stroller.

Holding the line is what Leonidas did.  But he did not draw that line in Sparta.

He traveled to meet the enemy, then drew the line.

They had to kill him to conquer it.

In his death, rose Liberty.