III to III: Career Opportunity for a III Patriot and a need that must be filled... 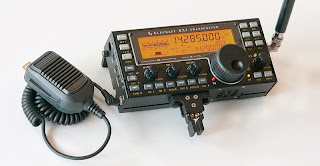 Request to our Comms guys - Patriots need your help:  Most of you know I have been playing catch-up on Comms for WRoL/SHTF.  My original paradigm never included having a Tribe, much less a Tribe that has members literally all across this nation, from coast to coast and border to border.  Whoops.  My bad.  Looks like my paradigm, if/when SHTF is going to include a LOT of travel on my part, and long-range, secure Comms will be imperative.

As I enter this learning curve I have come to the conclusion, as I have stated elsewhere, .mil and .gov absolutely own this piece of the battlespace - not only radio, but also digital.  OK - I accept that.  But I am a guy who always looks for where there is weakness to exploit.  I am also a hardcore Capitalist pig.

Some of you reading this blog have radio skills - mad skills.  I personally see part of my role in this community of Patriots as helping my fellow Countrymen improve their economic position in life, which improves most other aspects.

So, here's where I am with Comms:  .Gov and .Mil own the battlespace.  By extension, they own the manufacturers of the equipment made for the civilian market to make certain no cool widgets and gizmos are installed into commercially available Comms gear, through the FCC and threats of prison, blah, blah...

You know I am an old-school guy, and I apply that philosophy everywhere it is prudent.  I have my heart set on a KX3 from Elecraft as my first rig, with the bells and whistles, to travel with me so I can make contact when needed.  As we know, .Gov and .Mil can DF you REALLY FAST and send a missile your way if they so choose.  So if you crack the mike, you need to stay on the air as little as possible AND you need to beat feet and get out of that area ASAP.

So, the solution is Cold War Goodie #1: Burst transmissions.  The ability to key in your entire message in your transmitter, then hit a button, and the entire message gets "burst" transmitted at a high rate of speed.  In the Cold War they were working at 300 wpm.  The receiver would catch the burst, and decode it so the message could be deciphered.  With burst tech, the radio only had to be active for a quick second to send the message, making DF harder, thus the spy safer.

Cold War Goodie #2: Frequency Hopping.  As the message was "burst" transmitted, a magical black box made by some guys with glasses and pocket protectors broke up that 300 wpm message (which was probably coded) and bounced that message over a wide range of frequencies, making interception even harder by enemy forces.  (They call this "spread spectrum" today, and regulate the hell out of it)

Cold War Goodie #3: Encryption.  Not only did the agent in the field write his message in code, another magical black box further encrypted the signals - that were being burst and hopping all over bandwidth, making interception and code-breaking that much tougher.

I talked to one of the guys at Elecraft, and he wasn't really keen to build a small run (say 100 radios) with such features included.  To be honest, I have ZERO idea what legalities might be involved.  He seemed a bit nervous about frequency hopping and the FCC...

BUT:  If I was a III Patriot with such skills, and I wanted to contribute to the cause and make a few bucks so I could buy more bullets and beans, I have to believe that one of you radio guys could homebrew either one black box to do all three functions, or separate black boxes, each tasked specifically.  If you did it either way, you'd make your black boxes compatible with commercial, off-the-shelf gear so that no matter what rig X militia or Y Lone Wolf is using, they can talk to one another far more safely than they can under today's paradigm.  You'd also make sure that computers and ANY vulnerable digital components were not needed to avoid all NSA dirty tricks.

Build your widget into a nice little black box (keep it as small and simple as possible for the guy who has to carry this stuff with him or hide it often), slap a "III Radio Company" label on the side, and I can promise you every blog in this community would promote the hell out of your black boxes.  Keep your price-point as low as possible, while still making it worth your while!

Legalities?  I can't help you there.  While I know we already live in a world WRoL, there is no sense in getting yourself thrown into a cage if you can avoid it.  But I'd be willing to bet if you designed it and for whatever reason your attorney told you not to sell the widgets, you could surely draw up a set of plans written at the 3rd grade short bus level so a guy like me could walk into Radio Shack and break the law - I mean, try my hand at building a widget.  And I mean third grade short bus simple - some of us have never used a soldering iron.  But most of us learn quickly...

For you Comms guys, especially those of you with the skills and knowledge to build such devices, I am going to ask you please and directly: Please do this for your fellow Patriots.  If you have the skills and you are willing, but need start-up capital, I know you'd get support from our Patriots.  Just send me your PayPal email addy and I'll start plugging you this afternoon.