Let's start with a little Police State this morning... 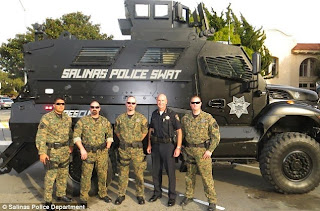 From our West Coast Russian satellite (California) For posterity I'll even list the caption in the paper, since it is naughty-or-nice season and in order to put people on the proper list, you need their names.  So:

So, for all you California III Patriots, your naughty list just got longer.  Figure out which guy probably has the keys, and say hello to him first.

I saw that phrase recently used by an ally, I jacked it.  ;)

Here's the link, from Kenny's place.

Then there is this from the East Coast Satellite of Russia (New York) titled "Garden City Cop Threatens To Ticket Man Washing Car In Own Driveway"  LEO rolled up on a guy washing his 1997 Volkswagon (God bless him for caring about his machine like that - most people don't take care of their bodies that well!) and told him he wasn't allowed to wash his car in his own driveway.  Couldn't vacuum it, either.  Neighbors might see it, and that's against the law.  No, I'm not kidding - I admit, I can be a funny guy, but I ain't that funny on my best day.  You just can't make this stuff up.

But you can make it stop.

One tyrant at a time.