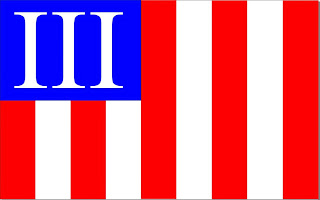 Stealing food from a group of people is politics.

Letters of Marque and Reprisal are politics.

Shooting at ideological adversaries is politics.

I know that more than 90% of the readers of this blog believe that electoral politics must continue, regardless of whatever else is happening.  We Americans prefer civilized politics.

For my allies headed to Idaho, I offer this for your consideration:

Benewah County is represented by two State Representatives (the Idaho version of Congressmen) and one State Senator (As it appears, similar to a US Senator)

One rep is a Republican - she won by about 123 votes.  Cindy Agidius
Rep. Agidius earned 10,083 votes, her opponent earned 9,960.
Here's a quote she made about taxes: A necessary evil. They pay for the infrastructure of our lives, from roads to schools. They pay the salaries of those who make our lives safer and better, our firemen, law enforcement, and our teachers.

The other rep is a D - she won by about 1,400 votes. Shirley Gene Ringo
Rep. Ringo earned 10,739 votes, her opponent earned 9,293.
Here's a quote from her on taxes: Enact a law permitting a local option sales tax. Remove the sales tax on food. Eliminate ineffective and unfair exemptions. ...Improve funding for safe roads and bridges.

The US Congressman who Benewah County (and the rest of the First District of Idaho) sent to Washington is a Republican and crushed his opponent.  His name is Raul R. Labrador.

US Congressman Labrador won more than 100,000 more votes than his nearest rival.  That was a beatdown.  Here's a quote from him on taxes: To grow our economy, I support tax reform grounded in two important principles - closing tax loopholes for special interests and lowering marginal rates for American families and small businesses.  Washington has a spending problem, not a revenue problem.  Government doesn’t tax too little; it spends too much.  He did better on a 2A position: The Second Amendment guarantees individuals the fundamental right to keep and bear arms.  I will oppose all legislation that infringes on the right of law-abiding citizens to own a gun.  Furthermore, I will oppose any regulation, administrative action or treaty that infringes upon our Second Amendment freedom.  As far as Republican Congressmen go, we could do worse.

One of the most often complaints heard in Idaho, especially about quality of life and politics is the emigration into the state.  They particularly sneer when you mention Washington State or Californians.  So I went hunting to see if there was any meat on those bones. 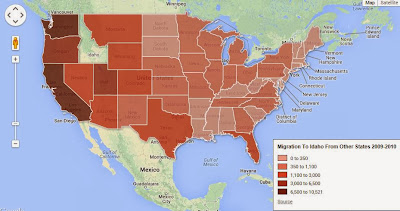 I linked the map to the source.  Seems Idahoans have a reason to be grumpy about emigration of peoples coming into the state who don't share their core values.  Washington State is the number one provider of new bodies to Idaho, with California at number 2.  Surprise: Senator Schmidt (D) and Rep Ringo (D) both went to college in Washington State.  Even Texas lost almost 2,400 people to Idaho.

Those Californians, Washingtonians, Oregonians, are movinginto Idaho politics and dragging the State to the Left.

There are more than 1,000 licensed FFL holders in the State of Idaho.  Idaho is a Firearms Freedom Act State.  I happen to know as a fact that more FFLs and more Entrepreneurs and more families are moving to Idaho, specifically to the region discussed above.

What does this have to do with the imminent implosion of the economy?

I have always held that it matters who occupies the seats of power, who is at the controls of the remnants of society after implosion.  Afterall, when SHTF would you prefer Obama/Ried/Pelosi deciding what orders are given to the DCI and Joint Chiefs - or almost ANYONE else?  The same premise applies at the local level.  Local.  Local.  Local.

There is a LOT room to the political Right of every politician in office in the Benewah political structure.  The 2014 election may be the last one with any semblance of reality for a long time.

We will never vote our way out of America's problems.

But in the case of State Senator Schmidt - just 400 votes could have had a better man in office.

In the case of Rep (R) Agidius, 124 people could have put a different person in her seat.

These are not the people I want meeting in Boise to decide the fate of FEMA and FedGov Operations in Idaho in a year or so.

Polygonal Battlespace.  Leave any flank exposed when you are being swarmed, and someone is going to exploit it.