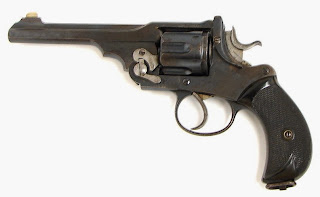 If Patriots went hunting tonight, would they have the Moral High Ground?  92% of you said yes.

Those are big numbers.  Granted, the people who tend to read this blog tend to be a bit more hardcore than most.  We tend to run-off folks who are willing to bend knee.  We tend to be Constitutionalists who like the way things were in 1791 when the Bill of Rights was ratified, and before the Federalists began gnawing at the edges of our Liberties.  We also have a modest percentage of regular readers who are Secessionists and true Anarchists (zero government, NOT "chaos"), and I think most of the folks in those two latter groups would find life in America more than acceptable if we managed to get back to a 1791 state of Liberty.

We are a very small group, numerically and by percentage.  Our little slice of the Liberty Movement certainly doesn't rise to the level of 3%.  I honestly doubt the entire "Liberty Movement" could muster 3% who would take arms and go to the Green and at the end of the day not try to impose their own brand of "freedom & liberty" on the losing team.  I know that my particular audience understands just how many "Patriots" think Social Security is a good thing.  Either you are for true Liberty or you are not.  You can't be a little bit pregnant.  Liberty is the same. 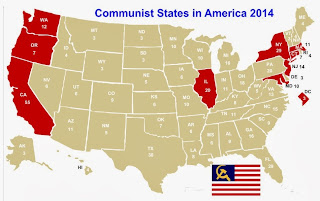 The map of I created shows the States I believe are truly Communist, right now.  (Please remember I am being loose with the word "Communist", using it as a label for Marxist/Leftist/blahblah/people who believe it is morally acceptable to take anything from one man and give that gain to another man via .gov coercion or brute force)  I don't mean that the respective States simply have Governments that are controlled by Communists, I mean I think the populace of each of these states is, in the majority, Communist.  They believe it is morally acceptable to take from one man and give to another via the mechanism of Government.

If I were to color Red every State that had it's Government controlled by such people, most all of the map would be communist red.  I don't think anyone can find a single state that has a DC Delegation that has a 1791 perspective, and I don't think anyone can find even one state legislature/executive/judiciary that has, or seeks, a 1791 perspective.  And now the big challenge: I do not think you can point to one single state that would have 1/2 or more of the citizen population in favor of a 1791 perspective of Liberty. (And I am including the notion that the slaves are as free as today, and women have the same Rights as today.)  ((Oh, and for the record, voting "Rights" is a state issue, and I do NOT believe everyone in the country has the "Right" to vote.))

You can test the theory.  Ask someone 2 questions, and you'll have your answer: 1) Should your neighbor be able to own a fully kitted attack helicopter and 2) Is mandatory social security good or bad.

You won't find many 1791 folks if you start asking those two questions.

Do our low numbers mean we should all just shrug it off, make life easier for ourselves and play their reindeer games, because we have no chance of ever recovering 1791 Liberty, something which so few want?  History tells us no.  History tells us that the world is moved by small groups of determined men who grind away for their goals.  Communism has been on the grind for well over 100 years, and they are very close to turning the entire globe Commie Red.

What we are missing, then, is a cohesive plan.  The readers of this blog may have a different idea of how to win than does the readership at WRSA or Sipsey or anywhere else.  Hell, there are large percentages within even this small community pulling in opposing directions.  I have a plan, and you have heard it before.  If every Liberty-minded American were to take the initiative when the time is right and follow the plan, we'd be back to genuine Rightful Liberty within a week.  Those who would be Masters would be begging for mercy or a one-way ticket out of the country.

The Plan: When the time comes, go find something Evil and kill it.  Stop when you are dead or Evil is gone.

It is simple and it is effective.  You know what is Evil versus what is not.  You know Evil versus stupidity.  You do not need any command & control hierarchy.  Simply go do your job as an American and find something that is infringing your Liberty or that of your Countrymen and make it stop.  When practical, empanel a jury of your peers and a Judge.  Do your best to steer people away from mob violence.

Remember, the original III Patriots did not fight for the Constitution.  They fought for the ideal of Liberty.  They had an easily identifiable set of targets - guys wearing red coats and people who gave aid and comfort to those guys in the red coats.  Afterall, it was the red coats that were the force projection of tyranny.  Stop the red coats, and you stop the tyranny.  Take out a tigers claws and fangs, and he's a kitty.

Nothing has changed...except the color of the coats.

Oh - why the Webley WG at the top?  Just because I have a deep affinity for that revolver and what it represents of Mankind.