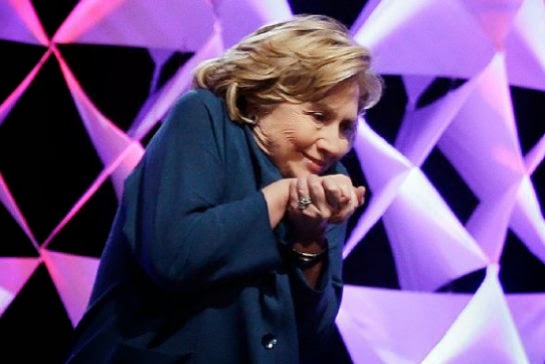 What happens when you dare confront one of the Elite Establishment in America?

People accused of almost all crimes get bail in America.  Even murder defendants often get bail.

But if you throw a shoe at one of the Protected Class, if you dare demonstrate the hubris of questioning their power, they will hold you in prison until you are found guilty and sentenced.  They will declare you a mental defective, further ruining the rest of your life - for throwing a shoe.

The charges facing Alison Ernst, the woman who threw a shoe at Hillary Clinton, are Misdemeanor Trespass and Misdemeanor Violence against a Person.

And because she dared to get pissy with one of our Master Class, she has been sent for mental evaluation, deemed a "flight risk" and ordered held without bail until her trial.  She faces two years in prison.  For throwing a shoe.  Had she thrown that shoe at you or me, she'd probably never see the inside of a courtroom.  Afterall, I am not calling LEO if someone throws a shoe at me.  But the Master Class can not tolerate such rebellion and disrespect.  8A will not help you any more than any other legitimate Rule of Law - because the Master Class does not respect such notions.

Understand we are at war.  This war is no longer in the province of "maybe".  In the desert American citizens picked up weapons and were prepared to kill the King's Men.  If you enter into ANY interaction with Regime functionaries and you fail to comprehend that we are at war, you will suffer.  Rules are now merely window dressing.  Popping a tire on a Regime vehicle is not going to be mischief - it will earn you real prison time.  Throwing a shoe at a member of the Master Class is a direct challenge upon their authority, and they will not tolerate such challenges.  You will not earn a fine and be sent on your way - certainly not before tasting the system.

I counsel every Patriot - take nothing lightly.  Under-estimate no person and no thing.

We are at war, and They know it.

Just curious - is anyone in this audience going to break her out?  Going to show up at the jail with arms and demand her release?  (She's not cattle...)  Are you even going to write the Judge or the local newspaper?  It's ok, answer yourself honestly.  Now you understand that no one will be coming to rescue you, either, when you fa'cock OpFor infrastructure.  You'd better plan to rescue yourself - and that means, do not get caught.  And if caught, you surrender only if willing to enter the system, for years...