Are you behaving any differently? 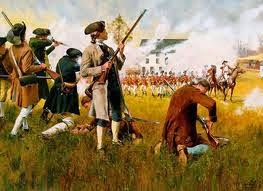 I designate two events in our immediate past that are fights in RevWarIII.

On October 13, 2013 at the WWII Memorial in Washington DC a few thousand American Patriots went to the National Mall.  It was an unarmed event.  But what made this event notable, different from many others, and what I consider to be the first official engagement of RevWarIII is that it wasn't a march.  It wasn't merely raised voices.  Patriots went with a goal - to knock the barrycades over and let vets inside.  Then that event evolved into something different from all the others because one man in the crowd raised his voice with the now-legendary words "To the White House!"  You know this man.  I won't identify him, though it probably doesn't matter at this point.  As a result, American Patriots did not simply protest, they picked up those Barry-cades and did not simply set them aside.  They were Returned to Sender.  They were dropped at the front and rear entrances of the White House.  And on that day, Regime forces also stood down in the face of Patriots.

The second engagement of RevWarIII was April 12th, 2014 on a patch of desert where no man could have predicted the first armed confrontation between forces in this war.  Bunkerville was the first time, perhaps since 1865, that American Patriots armed themselves, prepared for battle, resigned themselves to a deathfight if it became necessary, stood and were counted, against the Federal Government.

Bunkerville marked a turning-point in the war.  I find it unlikely any genuine III Patriots will ever again attend a protest without arms.  There will be more protests, and some of them will be unarmed, such as the coming May 16th Operation American Spring.  But I posit that the people who will attend OAS unarmed are not likely III Patriots.  Remember what defines the III Patriot from all others - the genuine intent to fight if necessary.  Anyone protesting today without arms is telegraphing that they are not ready or willing to fight, at least not yet.

But men who are willing to fight have now taken the field, prepared for that fight.  That was Bunkerville.

The question to III Patriots: Understanding that RevWarIII is now underway (Not just by way of reasoning of Patriots - you can bet your arse any future event will find Regime forces ready for a real fight)  have you changed your behaviors in any way?  Are there things you do now, or will not do now, with the realities of Bunkerville in our past?

I'm going to add a box on the sidebar to list RevWarIII engagements.  We'll add to it as engagements occur.  Remember there will be lulls, and time gaps between engagements perhaps measuring in years.  In our first Revolution against the King the Stamp Act was 1765, a decade before Lexington.  The Boston Massacre was 1770 - five full years before Lexington.  The Tea Party wasn't until 1773.  And more than a year elapsed from the time John Parker and his men stood tall and the men in Philadelphia declared Independence.

Do not be fooled by seeming inactivity.  The Enemies of Liberty are working tirelessly.

What are you doing differently now as compared to pre-Bundy?