Playing Paintball at the Senkaku is no f'n game... 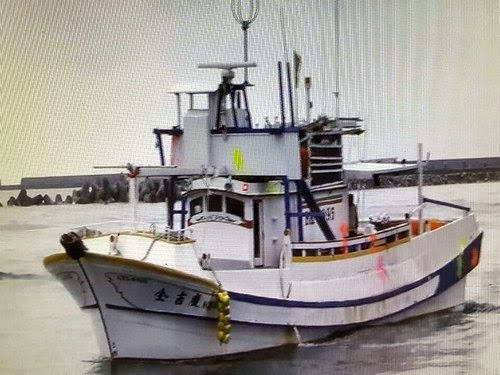 There is no group of people on the planet as sensitive to issues of Face and Honor (two VERY different matters, though often inappropriately conflated) than the Asian.  Of the Asians, the Japanese has historically been the most sensitive.  This tendency has been tempered since the Western influences imposed upon their culture in the wake of WWII - but Westernization is a shallow phenom.

The picture above is a Taiwanese fishing boat.  The yellow, orange and pink marks are paintball hits from a Japanese Patrol boat.  The message was sent and received.

To you and me it may seem a wide gulf between shooting paintballs at a foreign ship and shooting hot rounds.  But to the Asian, especially the Japanese, there is very, very little difference.  The Japanese is saying "This is ours.  We are willing to embarrass you, so you know we are willing to kill you.  At this moment we'd prefer not to kill fishermen - but stop pushing us.  You have been warned.  Stay out."

I have counseled Patriots to keep an eye on Ukraine and the Senkaku for signs of synchronous action by a Sino-Russo Team.  Ukraine has come to pass as predicted.  Senkaku is warming up.  I contend that shooting paintballs is a very deliberate escalation from even the games of bumper-ships played once in awhile in the South China Sea.

Every day that passes finds more affirmation of my deepest concerns: RevWarIII will be fought in the midst of WWIII.

The entire world needs a reset.  We on the Liberty side of the world believe this to be true.  Those on the Master-Class side of the world are in agreement.  So, there will be a reset.  It will be ugly and global.  No household in America will remain unaffected.