BonnieGadsden ponders how Bundy may keep himself and family safe... 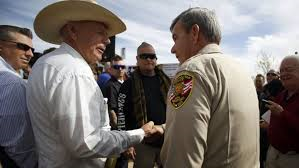 **UPDATE**  I think BonnieGadsden is on to a master-stroke.  Patriots can't keep an eternal vigil at the Bundy Ranch in sufficient strength to keep the family safe.  What could Cliven do to put his family beyond touch?  Run for Sheriff.  Put himself in a spotlight that protects himself and his family.  The current Sheriff - who has proved useless - is up for election this November.  Cliven could drop into that race and own it.  What say you - Draft Cliven Bundy for Sheriff?  Here's a concept site.  I've got an email in to the family.

Sheriff Bundy?  Why not?  He certainly could win if he strikes while his issue remains current.

And the office of Sheriff is a political office, far more than a Law Enforcement office.