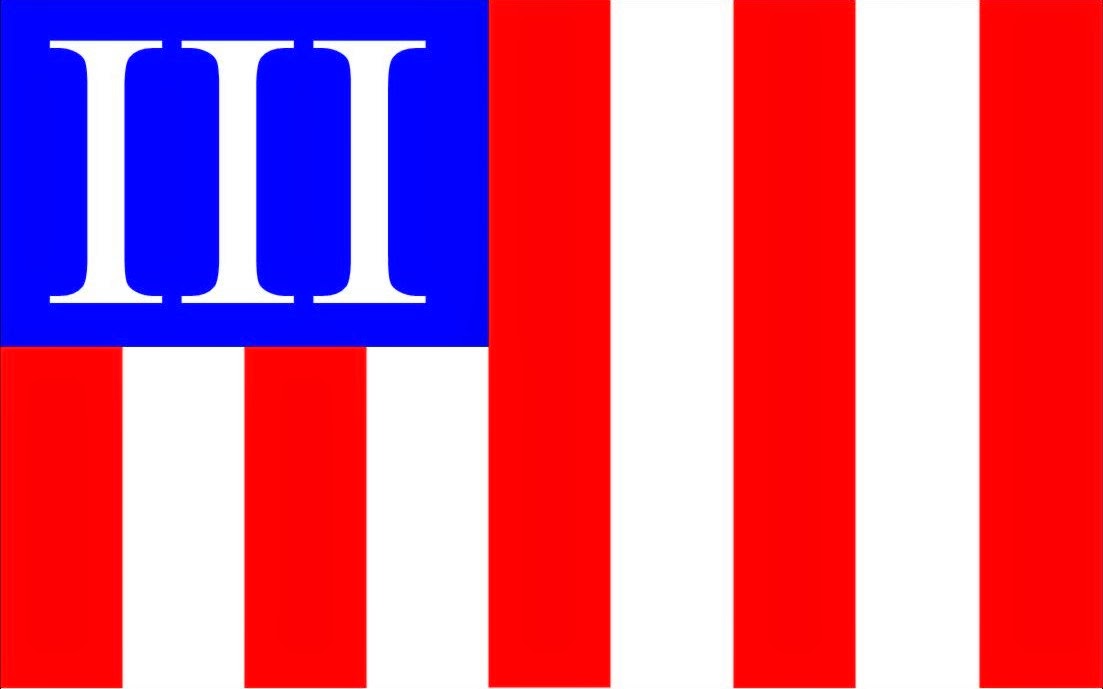 As most of you know I created my own III Battle Flag, for several reasons.

The Nyberg is no good to me (Not because MBV threatened to have Gail Nyberg sue me for using it) but because the field of 13 stars is no longer truly representative of our fight today.

So, here's how I came up with the flag you see.

The blue field means exactly what it means on Betsy Ross' version: Vigilance, Perseverance, and Justice.

And the III represents every American in every generation who has picked up a rifle, or would pick up a rifle, for Rightful Liberty.  Not the Pledge of Allegiance.  Not the Constitution.  For Liberty.

So, this is my personal III Battle Flag.  I will fly it where I go, especially if I am heading into Harm's Way.  One day, one of you may wrap one around my corpse and take me home to my wife in it.  I hope I am that lucky.

I'm posting this because I am going to place an order for these flags.  If there is no interest from you folks, no worries - I will spend enough to buy myself a hand-embroidered one - mega-expensive.

The next rung down the quality ladder is an applique version of the flag.  I'll have to retail these in the $150 range.

Flags made in the same manner as III Rests flag would retail at about $100 each.

All three versions are suitable for outdoor use - but there's no way I'm putting an embroidered flag out in the weather.  But the applique and printed versions are good for outdoors and weather.

XXXXXX - I've put a poll up on the right - if you are interested in a flag, please click the appropriate category.  Because of the minimum quantities and expense of bulk orders, we'll go with whatever the majority chooses.  XXXXXXX

The polls aren't working on Blogger, so you'll just need to leave your two cents in comments.