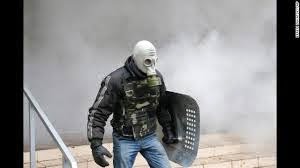 Ukraine is lost to the EU.

The campaign waged by the Russians to tear away the legitimacy and control of Kiev has been brilliant on every level, flawlessly executed, and will prove to be fatal for all EU designs to bring Ukraine into their geo-political orbit.

While the news cycles are still focused on the eastern cities, any serious analysis must conclude that everything east of the Dnieper belongs to Russia whenever they choose to take possession - extending to the entire capital of Kiev.  Everything west of Kiev is also now Russian property, they simply haven't closed the loop.  They're on no timeline but their own.  It'll happen when the Kremlin thinks the most political gain may be had.

It may sound like I am a fan of Vlad and his Team.  Not even close.  I respect how they have played this game, and I advise every Patriot to set aside any bias and look at the strategy and tactics that have been on display.  There is much that can, and should, be implemented by Patriots here at home.

A simple look at top headlines from the last 36 hours tell where things stand:

Ukraine to bring back CONSCRIPTION: Embattled Ukraine today announced it was bringing back conscription as a mob of some 300 pro-Russian militants seized control of the prosecutor's office in Donetsk after overrunning police.

Several of the 100 police officers guarding the building were injured and in some cases severely beaten as the crowd hurled rocks, threw Molotov cocktails and stripped them of their weapons and shields.

Rebels quickly took control of the building after mounting a second assault from the back, hoisting the Russian flag, barricading the front door and burning Ukrainian symbols in the street.

Putin Demands That Ukraine Pull Its Troops From Southeast:  President Vladimir V. Putin of Russia told Chancellor Angela Merkel of Germany on Thursday that Ukraine must remove its military from the southeastern region of the country to resolve the showdown there with pro-Russian militants who have seized several official buildings, the Kremlin said.

“Putin emphasized that it was imperative today to withdraw all military units from the southeastern regions, stop the violence and immediately launch a broad national dialogue as part of the constitutional reform process involving all regions and political forces,” the Russian government said in a statement. 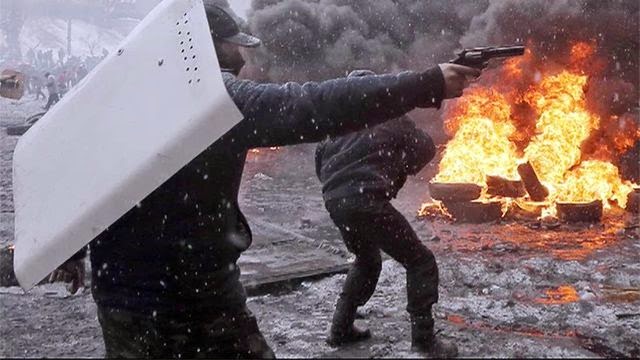 Ukraine Says That Militants Won the East:  KIEV, Ukraine — It is by now a well-established pattern. Armed, masked men in their 20s to 40s storm a public building of high symbolic value in a city somewhere in eastern Ukraine, evict anyone still there, seize weapons and ammunition, throw up barricades and proclaim themselves the rulers of a “people’s republic.” It is not clear who is in charge or how the militias are organized.

Through such tactics, a few thousand pro-Russian militants have seized buildings in about a dozen cities, effectively establishing control over much of an industrial region of about 6.5 million nestled against the Russian border.

Day by day, in the areas surrounding the cities of Donetsk and Luhansk, pro-Russian forces have defied all efforts by the central government to re-establish its authority, and on Wednesday, Ukraine’s acting president conceded what had long been obvious: The government’s police and security officials had lost control.

Study, Patriots.  These principles will work for you, too.

Yet in that part of the world, the trigger for WWIII European Theatre has now been set.

It simply needs to be tripped when Washington decides to go...

It won't take anything more than a few NATO planes, or a few US/NATO soldiers getting capped, or a US ship getting buzzed in the Black Sea.