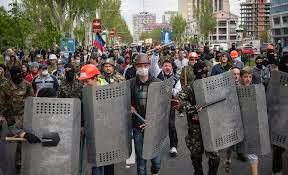 The lessons in Ukraine for American Liberistas should be seen as a gift from Providence - a real-time, full-color preview of some of what Evil this way comes.

Here is a rhetorical for you III Patriots to consider:  You are the Officer Corps of RevWarIII.

Like it or not, when SHTF and that percentage of people who are willing to pick up a brick and start hunting Tyrants start to look around for a Tyrant to share his brick, you're the guy or gal who will be seen in what appears to the average Tyrant-Bricker as a military man with his sh*t tight and squared-away.  There is a significant portion of pissed-off Americans who will, by nature of your bearing, demeanor, kit, and obvious knowledge, who defer to your leadership.

You can like it or hate it - not my problem.  The fact is you will do the right thing, or you will not.  Oh, and if you turn out to be a dink or poser, they'll probably bash your head with that brick and hand-out your gear before your corpse is room temperature.

Look at that picture above.  Ski masks, surgical masks, construction helmets, small Spetsnaz-type shovel, pipe, and riot shields donated by local Tyrants.  These guys are ready to rock - and that crowd behind them literally has their backs, as much as an un-trained, un-equipped mob of pissed-off civilians can be.

Ask yourself, III Patriot, how are you going to lead these people when they look to you for leadership?  There's no time for leap-frogging drills.  You've got a limited time to get them better-armed, better fed and sheltered, keep their morale high and keep them willing to fight by hitting Tyrants and scoring victories.

I know many of you have been training for Buddy Teams, Fire Teams, and such - how is your small force going to use the power of this mob to secure your AO?

Rhetorical - this is a conversation for inside your head, and maybe with your Team.

Just be certain not to let Liberty die because you failed to consider the above reality.