“We have historically been a paramilitary organization...” 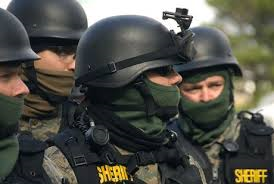 “We have historically been a paramilitary organization,” observed Indianapolis Police Chief Rick Hite during a September 17 City Council meeting. “And we serve whoever sits in that chair, regardless of race, gender, creed, or political party. I don’t know what we would do if we had to go to battle, and we had to make a determination, based on past practices, whether or not we wanted to go into battle. … I am a soldier in an army. We serve you in that way…. We should not be in a position where we’re going to have to decide how we’re going to police this city.”


adjective: paramilitary; adjective: para-military (of an unofficial force) organized similarly to a military force.
Will Grigg has the story, here.
A word of caution to our LEO who think they are SEALs & SF - If you behave like a paramilitary force, you may not complain when citizens begin to treat you that way.
Kerodin
III Percent Society, here.