Ferguson Study Group VIII: Thanks for the tip, Chief... 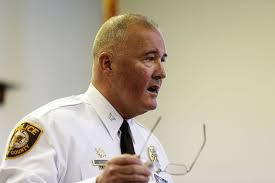 “I don’t think we were underprepared. But I’ll be honest with you. Unless we bring 10,000 policemen in here I don’t think we could prevent folks that really are intent on just destroying a community. It doesn’t take very long to throw some kerosene in a building and burn it as you’re running past.” - St. Louis Police Chief Jon Belmar

So, let's do a bit of analysis.  The Chief of St. Louis County PoPo doesn't run a small shop.  He's got some experience and insights.  And his statement last night was very insightful for coming events that may see Patriots on the Green.  Let's assume he simply pulled the 10,000 number from his bum.

Using the Chief's number, he needs one LEO on the street for every 1.3 adults over 18 and younger than 65, in order to stop people from burning down their own community.  But the actual number of people on the streets in Ferguson was well under 5,000 from everything I saw and every source I have read.  And the number of people who flipped cars, broke windows, grabbed televisions and set fires was very damned small in actual numbers compared to the total population.

So, the Chief is really saying he needs at least 2 LEO for every 1 person who takes to the streets.

Heh - that ain't happening anywhere in America - ever.

We call this the Ferguson Study Group for a reason.  Watch.  Take notes - not sides.  Consider what you see in Ferguson through the lens of the Minuteman and apply it to your AO.