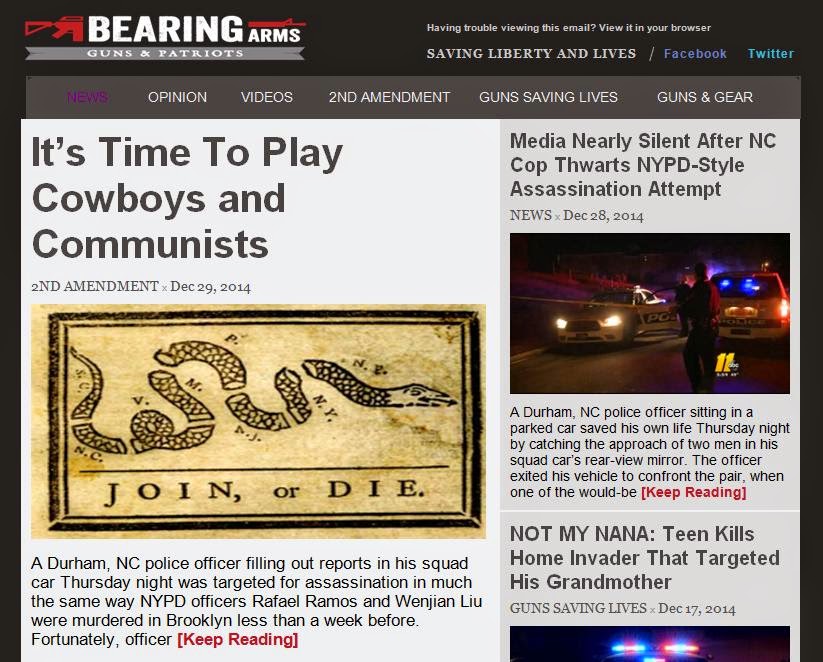 I stopped reading Bob Owens a long time ago, after visiting his blogs perhaps 3 times.  It takes about five minutes to put him in the Copsucker category, if you are reading slow and have a brain tumor.  I know, many people think he's awesome.  Good for them.  Stay out of my AO.  And for the fuck of all that is warm and fuzzy, do NOT write me and EVEN TRY to defend Bob fuckin' Owens 2A positions.  I've read too many.  He's a straight-up Statist.

The image above is from a bit of SPAM I rec'd in email - I have no flippin' idea how he got my email on his list, who merged with whom, who bought what list, et cetera, and in five minutes of searching I STILL can't find the unsubscribe widget.  Who knows - Bob may be one of those guys who Googles his name on alert, so maybe he'll do me the favor of taking me off his email list.  Thanks, Bob.

See the headline above - the one that came into my email box?

Tough talk for a Copsucker.  "It's time to play Cowboys & Communists."

Yet when I click through to his actual site, the headline on the same story is: "Media Nearly Silent After NC Cop Thwarts NYPD-Style Assassination Attempt."  No, really - here's the image for posterity (because we know how Copsuckers like to change history by re-writing their work.) 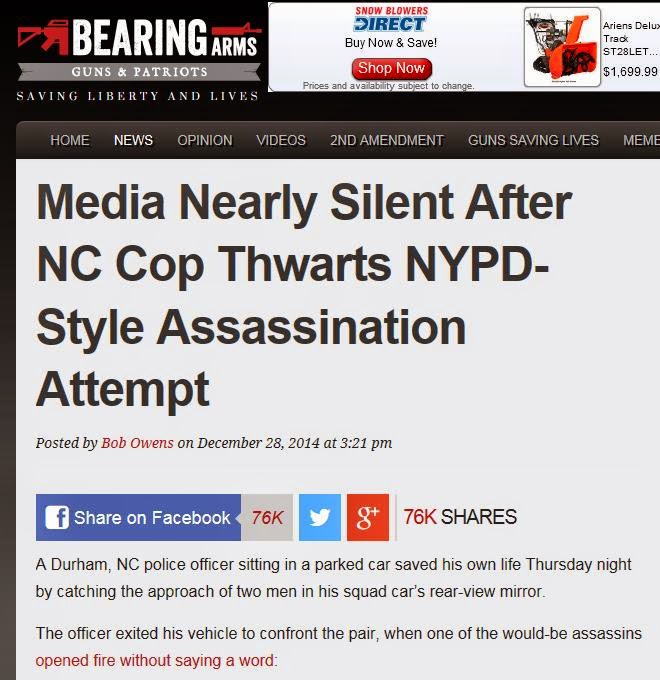 See - same opening text in the article, different headlines because some people like to try and manipulate you at every opportunity into clicking-through to their shit.  Now, I really don't give two damns and half a turkey turd about his marketing angles - if he's even in charge of such things.

(Remind me - did we use modern Jurisprudence when the Cowboys played the Indians a few dozen generations ago?  Does that mean Bob endorses the same tactics against anyone he considers to be a "Communist"?)  And don't write me asking if I am confused - because I DO advocate scorched-Earth against Commies.  The problem is Bob is calling YOU a Communist - you Right-wing extremist who doesn't believe in background checks and bending knees to Neil & Bob for Rights given to us by our Creator.

I do take issue with the characterization that if one targets LEO, one must be a Communist.  Some of you sharper tacks who understand 1984-speak already know what I am talking about.  For those who did not benefit of having read 1984 during your impressionable and formative years, le' me 'splain, Lucy.  Bob's ilk are Statists.  Statists gonna State.  That means if you are part of the State, or down with a member of the State, and cuddle their balls just the way they like 'em cuddled, you get to play in the State's game.  One of the ways to lock people out of the Statist Empire that has become the United States of America, the folks in the State identify people they don't like, assign them a label that EVERYONE knows is bad, m'kay, then repeats until the brain dead masses nod when "The State" takes out one of those 'Bad' elements.  Got it?

III Patriots: Bad People are trying to game us from every angle, and I promise you (from direct and personal knowledge) there are many, many Statists inside our wire, calling themselves "Patriots", and making excuses for every Statist interest that matters to them.