ConCon & Choking a Man to Death 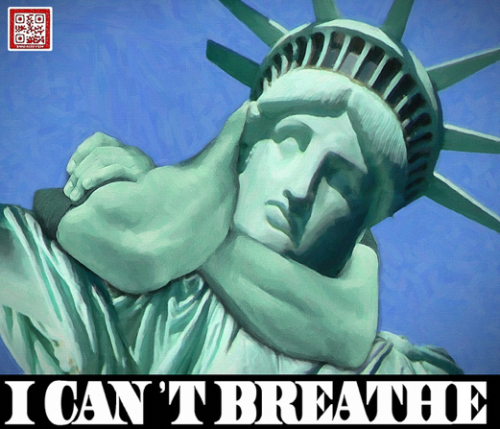 CA & Wirecutter have two good discussions going about renewed calls for a ConCon or Article V.  Read the comments, see where your fellow Patriots come down on the issue.

The picture above is on many blogs, and it reveals an ugly truth.  The man in New York who was choked to death by NYPD was murdered.  Not killed.  Murdered.  I have told every CQB class I have taught that if you find yourself in that choke, in a ring, with a ref, you have between 3 and 5 seconds before you go out.  If you are on the street, where there is no ref, and where your attacker has buddies piling on you - the odds of you surviving are near zero.  Whether you live or die is almost entirely at the discretion of your attackers.  If he hasn't broken your neck and he relieves the choke within 5-10 seconds, you'll probably make a full recovery.

This story and the ConCon topic are related.  Those who mean to be our Masters have put Armies (literally) in the field who will murder.  The guy in New York wasn't hurting anyone.  He was selling individual cigarettes to people on the sidewalk.  The NYPDs official response: "It's against the law to do that here."  So however inane "the law" may be, there are legions of men and women in uniform who will murder you for breaking it, and they will get away with it.

Here's a comment I left over at Kenny's: Sorry – the original Constitution came from a Convention to Amend the AoC. They amended it – then they amended the name to the USC. Then the States ratified. They did nothing out-of-bounds or “illegal” under the charter given to them. All legit, all legal, and it did, in fact, reflect the will of the people.

So any school-boy naiveté that “It’s just an Article V – it can’t change anything” is misplaced. And look at the State Legislatures today – wholly owned by special interests, willing to cast their vote then quit politics, their reward a life-long 7-figure salary on K Street or in whatever State Capital they prefer as part of the new Polit-buro.

You think they can’t get 38 State Legislatures to eviscerate the Bill of Rights – including making firearms illegal for everyone but .gov employees? You think they are worried about the fallout – such as an uprising by gun owners? They’ve already done their calculus and decided they can put down any “Criminal” who doesn’t accept “The will of the people” – and they have a 50-50 shot of winning.

What too many people fail to understand is that the people in America are going through exactly what happened in pre-Nazi Germany and pre-Soviet Russia – men and women with very bad intentions mean to “transform” America, and they are doing it, and they have been doing it. All that remains is the final ink on paper, the final vote making guys and gals like us “Official Enemies of the State” and then murdering 20 or 40 million – the same way every other Dictator has taken power in the memory of Man.

It’s hard for most Americans to believe for two reasons. 1) We are on the inside, and a tornado looks different on the inside than from the outside. 2) Normalcy Bias – “It can’t happen here.”

My fellow Patriots, far too many of us need to unfuck ourselves.  CA mentioned the other day that not one combat veteran he knows thinks it is wise to begin counterforce or countervalue work right now. (paraphrased).  I concur 100% regarding counterforce.  Countervalue, however, requires a few qualifiers.  But this isn't the post for that.  Hint: Read the post below about the word "Commando".

I'm not talking about training up to SEAL or SAS or SF standards.  I'm talking about WWII training and mission scope.  You can take it all the way back to Rogers Rangers if you wish.

A Commando is not defined by how highly trained you are and being in super-Human physical condition.

A Commando is defined by the tasks he chooses to undertake.

The smart Patriot understands that a combination of countervalue, common sense, better-that-average marksmanship and ability to sneak up on someone, and finally - employing all tasks while mindful of Covert or Clandestine - can make it so you can do a piece of work, then go home (or to a Safe House to lay low for a few days to ensure your cover remains intact).

That's a Militia Commando.  You will work alone or in small, highly trusted groups, daring to put your life on the line, to achieve a specific goal.